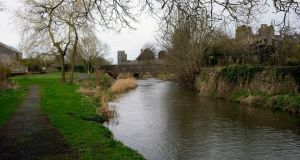 River walk by the Clashawley river at Fethard, Co. Tipperary, with Watergate Bridge and medieval town walls in the background 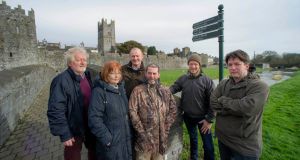 “A river,” says Terry Cunningham of Fethard Historical Society, “is not just a big drain.”

How we manage our rivers depends to a considerable degree on how we see them. EU legislation on water quality and flooding is driving great changes in our landscapes. Decisions taken now will have very big social and environmental impacts far into the future. The response of one small rural community to this challenge seems instructive.

The Clashawley river runs by Fethard, a small but rather special town in the heart of Tipperary horse country. For centuries, mills on the river were central to the town’s commerce, while its fish helped feed its populace. It’s much more than a big drain.

Fethard was laid out well by a Norman lord at the beginning of the 13th century. Its remarkably well-preserved walls encompass fine fortified medieval town houses, an abbey and a church, and a tholsel currently being restored as an equestrian museum.

“It is not so much a jewel as a jewel box,” as another member of the historical society put it.

Fethard stands on a hill above the Clashawley, a tributary of the Anner and ultimately of the Suir. Very sensibly, the Normans did not build in the flood plain.

Alan Moore, a keen kayaker and historical society member, speculates that the recognition of the town’s cultural significance by the Heritage Council and Fáilte Ireland saved it from the boom-time folly of a housing estate along its broad river banks. There is great potential here, he says, to develop parkland and walking trails.

The views from the medieval buildings above the river are bucolically rural. Only a scattered handful of modern residences may be vulnerable to extreme flood events, which have been historically rare here.

So Moore, Cunningham and a number of others were surprised and disturbed to learn that the Office of Public Works (OPW) had rated the town as a high risk for future flooding. The OPW is proposing the construction of flood walls, and extensive dredging, for Fethard as part of a current nationwide exercise called Catchment Flood Risk Assessment and Management.

But local people fear that flood walls could mar the town’s historic views, and that dredging could damage local wildlife, including spawning beds for trout. In a town that appears to be on the cusp of a tourism take-off, this would not be good news.

The historical society, an angling club, and local members of BirdWatch Ireland, all made submissions to the OPW proposing alternative solutions, including some very innovative ones. Meanwhile, Inland Fisheries Ireland, the state agency responsible for the conservation of freshwater fish stocks, made a particularly critical submission:

“Our approach to managing flood risk has to change,” wrote Frank O’Donoghue, a senior fisheries environmental officer. His submission called for the integrated management of entire catchments, promoting natural flood control, rather than relying exclusively on barrier construction and dredging.

Natural flood control (aka “soft” or ecological engineering) involves slowing down the flow of water, all the way from mountain ridges to estuaries, by natural rather than built structures. Restoring woodlands and hedgerows that hold and restore water on hillsides, restoring riverbank vegetation that prevents erosion, leaving bends in rivers that arrest flow, and restoring wetlands that act like sponges: these measures can all greatly reduce flooding.

Hard barriers, canalisation and dredging, in contrast, speed up flow. They may solve a flooding problem locally but they often simply pass it on downstream. And their effect on natural systems is negative. But they tend to be popular with local politicians who want to be seen to “get things done”.

“The lowering of a channel bed . . . could result in canalisation [that] would be most undesirable in terms of the fisheries ecosystem,” O’Donoghue warned.

These concerns are echoed by Sean Maher, secretary of the local angling club. He points out that the trout in the Anner and Clashawley are unique in the Suir catchment because they do not migrate to the bigger river to feed in summer.

“This is because there is such an abundance of food for them right here,” he says. This is itself an indication of the remarkable health of the local aquatic system generally. He believes that dredging may not only damage spawning beds, but increase siltation, destroying the invertebrates on which the trout feed.

Meanwhile, the historical society came up with some potential solutions in its submission. As well as arguing for more “soft” engineering options, it suggested two hard engineering options with, it claimed, low costs and low aesthetic and ecological impacts.

A 19th century print reveals that the Watergate bridge has two buried arches. Re-opening even one, the society argued, would significantly reduce water build-up in a flood. Similarly, a relative new (and quite ugly) pedestrian bridge acts as a “pinch point” because it is very low over the water. Replacing it with an arched bridge could also reduce water retention. There are indications that Tipperary County Council may also now favour these options.

Gerry Gallagher, an OPW project engineer, told The Irish Times that his office was currently reviewing all submissions from the public consultation process. He recognised that Fethard had “come up with some very good suggestions”.

However, he said that OPW computer modelling had now tested the proposal to open arches and raise the pedestrian bridge, but found they would not have the desired effect. He did not rule out a shift towards more natural methods of flood control, but said that this was a new area needing further research.

He stressed, though, that detailed ecological studies, and further public consultation, would be undertaken before any construction commences. So it’s still all to play for.

Fethard, it seems, has set a remarkable and positive example. Is it too much to hope that considering the management of our rivers is bringing us together, helping us to recognise that everything in our landscapes is connected, and creating a new kind of citizen engagement with public environmental policy?

Our water management is subject to two EU rules, the Water Framework Directive and the Floods Directive. These rules derive from different but equally urgent policy priorities, and are not always easy to reconcile.

Of course we need a both/and approach to these priorities, and not an either/or one. We depend on clean water and healthy aquatic systems for life itself; and life itself, as well as property, agriculture and prosperity, is threatened by increasing flooding linked to climate change.

At present, the Environmental Protection Agency (EPA) is piloting implementation of the Water Framework Directive, and the OPW is heading up our implementation of the Floods Directive. These agencies do talk to each other, and to the new Local Authorities Water and Communities Offices, which aims to co-ordinate county councils on water issues and engage local communities with them.

They also talk to smaller agencies like Inland Fisheries and the National Parks and Wildlife Service, and to NGOs and their umbrella bodies like the Sustainable Water Network (SWAN), which has been very critical of the OPW’s flood plans to date (See http://www.swanireland.ie/download/SWAN-Response-to-FRMP-UoM-16.pdf ). And both directives require engagement with the public at large, something of a challenge for our traditionally aloof public service.

This is all a very steep learning curve, requiring many bodies and individuals to co-ordinate and operate outside their comfort zones across several disciplines and absorb a lot of new thinking. It’s not surprising if the process gets bogged down at times, but it’s vital that it now delivers good results for all of us.