€140 million plan will ‘turn the city of Cork into building site,’ Save Cork City group says 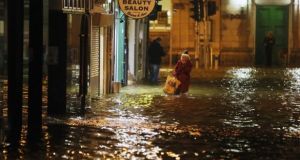 Critics of the €140 million Cork Flood Relief Scheme say it will turn the city in to a building site while ultimately being ineffective in terms of protecting against rising sea levels.

The new scheme involves the Lower Lee, which is down stream of Inniscarra, Co Cork and through Ballincollig, Co Cork.

It will also go through Cork City and its tributaries for the purpose of preventing or substantially reducing the periodical localised flooding of lands.

The Save Cork City group say they welcome plans to tackle the serious flooding problem.

However spokesman and civil engineer, Mick Ryan, says the scheme is simply the wrong approach.

“The OPW are planning to construct flood relief schemes in Cork city. Their proposal is to build flood walls, pump chambers and deep drainage in an urban environment.

“Their project is going to last somewhere between six to ten years. They are basically going to turn the city of Cork in to a building site. It is a completely wrong approach.

“What they should be looking at is trying to reduce the flood levels in the city by tackling the flooding both upstream and downstream.”

Save Cork City says the proposals will destroy huge parts of Cork’s historic character through damage to and removal of the city’s historic quay walls and railings, replacing them with basic concrete walls.

The group also stresses that the Docklands, Blackrock and Mahon are not considered in any depth as part of the proposal, making them more susceptible to flooding in the future.

Meanwhile, the OPW has dismissed calls for an independent review of the flood plans.

Millions of euro worth of damage

Members of the public who attended a forum on the flood relief plans on Friday night were told that such a review would delay a much needed set of works.

The OPW and its engineers said the plan was a cost effective solution to the flooding problem in the city.

The OPW added it is open to negotiation on the type of flood defences in certain areas, but its plans for flood walls will not be scrapped.

Meanwhile, the proposed flood relief scheme is designed to prevent a repeat of the 2009 fluvial flood and the 2012 and 2014 tidal floods when large tracts of the low lying city centre were inundated to depths of a metre or more in some instances, causing millions of euro worth of damage.

The plan involves advanced flood forecasting and improvements in dam operating procedures at Inniscarra Dam some 15km upstream of Cork to ensure water is released well in advance of predicted floods.

Construction work is expected to begin later this year. Work will start down river of the Inniscarra dam and will progress in phases westwards towards the city centre.

It could be 2022 before the scheme is completed. Submissions on the plan will be accepted for another month.