Michael Viney: On my knees again, planting potatoes in the cool, silky soil

Most potatoes need up to 15 fungicide treatments. Could mapping their genome end blight? 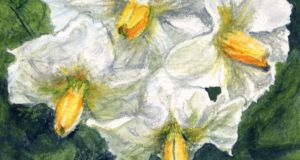 Potato blossom: I started planting in February, for even earlier great-flavoured spuds that we can eat in their skins. Illustration: Michael Viney

Down on my knees again, I could be thanking Gaia for sparing the polytunnel from late winter storms but was actually planting potatoes. It’s been good to push my fingers into the soil, cool and silky as it is, and never mind the grit beneath my nails.

Growing potatoes in the tunnel, along with everything else, might seem an odd sacrifice of covered space, but an old man has his reasons. It’s a biggish tunnel (10m by 7m), quite enough for my energies. It can be tackled in bad weather, and there’s a handy chair for rests, with Lyric in my ears and raindrops drumming on the roof.

St Patrick’s Day is more customary for sowing “first early” potatoes outdoors, when traditional, but blight-prone, favourites such as Duke of York finish growing before disease gets going. I started planting them in the tunnel in February for an even earlier crop of great-flavoured spuds we can actually eat in their skins.

“Late blight” spreads its spores in humid, sultry weather, typically from July onwards, when the fungus, Phytophthora infestans, completes its lifecycle in as little as five days. In Ireland, especially vulnerable to blight, climate change may add to the threats from new, invading and shape-shifting strains of the plague. Dramatic changes in Ireland’s blight, wrecking unsprayed crops in 2008 and 2009, prompted fear of “the emergence of novel sexual recombinants with increased aggressiveness.”

The aim was to find genes with resistance to blight, whose proliferating strains originated in wild potatoes in central Mexico. The most promising genetic cluster is known as chromosome four, evolving naturally in both potatoes and tomatoes as an intracellular defence. Ireland’s researchers mapped a million nucleotides (genetic information for DNA) from that most promising neighbourhood.

Teagasc has an excellent record in breeding new potato varieties, such as the widely grown red-skinned Rooster. Can it breed plants to battle the new mutations of blight? Most existing varieties need spraying with fungicide up to 15 times in the season. That costs €800 per hectare, and 8,000 hectares of potatoes are grown nationally.

Resistant varieties such as Sarpo Mira and Bionica, grown by more and more organic gardeners, are the product of many years of conventional breeding. In contrast, as Teagasc’s Dr Ewen Mullins told a national conference, a resistant GM potato line can be produced in about 18 weeks.

The first one under test in Europe, and now in Ireland, is a “cisgenic” GM potato (using genes already within the family; “transgenic” genes are those grafted from a different species). GM Desiree, using blight-resistant genes from an Argentinian potato, was developed at Wageningen University and has resisted blight in the Netherlands for some years.

Dr Mullins, a senior scientist with Teagasc, looks on a GM potato as “in effect a research tool”. He has been emphatic that Teagasc’s research is “not about proving GM is the sole answer to eradicating blight disease” or advocating the GM industry. Nor does it want to commercialise a GM blight-proof potato. Dr Mullins joined the EU-funded research project, Amiga, which concluded that any environmental risks of GM crops, including soil biodiversity, can be effectively assessed and controlled.

The few studies so far, says the team, have suggested that consumers are willing to pay a premium of between 5 and 17 per cent for non-GM potatoes. It conducted “experimental auctions”, new to market research, which had groups of people across the country bidding between bags of conventional and GM potatoes (all rather complicated and best explored in the article in the winter issue of Teagasc’s TResearch magazine (online at teagasc.ie).

The upshot was that 14 per cent of the people showed a preference for GM potatoes, and almost half would choose them if they were 20 per cent cheaper than “conventional” potatoes. As for commercial growers, 60 per cent would grow GM spuds if that gave better returns (in a saving on sprays, for example).

This is meant to help the department in “enhancing management practices to maintain the sustainability of current potato systems”. I’ll carry on kneeling – so long as I can stand up again.