Drones to be used in crackdown on illegal dumping

Plan will see community groups and agencies get €650,000 to fight illegal waste 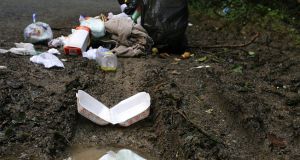 Fly-tipping and illegal dumping is getting significantly worse in many parts of the country, spurred by resistance to pay-by-weight rules favoured by waste companies

Minister for the Environment Denis Naughten will on Monday announce a plan to use drones in a new crackdown on illegal dumping in rural and disadvantaged areas.

Fly-tipping and illegal dumping is getting significantly worse in many parts of the country, spurred by resistance to pay-by-weight rules favoured by waste companies.

Illegal dumping is now a major issue, and this year the Department of the Environment is expected to spend close to €10 million on enforcement action.

Community groups and State agencies will now get €650,000 to combat the issue, some of which will be used to pay for drones which will be able to catch aerial images of dumpers.

The new funding will also allow for other so-called “smart enforcement interventions”’ such as overt and covert CCTV, satellite imaging and enhanced communications technology.

“Through the use of smart technology I am confident the new initiative that I am introducing will prove effective in both deterring and catching illegal dumpers,” said Mr Naughten, who will launch the plan in Ballinasloe.

“We have to be one step ahead, and technology combined with a real community drive on the ground will give us an edge in combating this scourge.

“My message is clear, if you dump waste illegally and blight our countryside and roads with filth you will be caught and prosecuted. I am encouraging community groups across the country to come together to apply.”

The money will be targeted at the worst hit urban and rural districts, while “problem zones” identified in Irish Business Against Litter surveys will also receive preference.

Last year Dublin City Council fell foul of the Data Protection Commissioner after it posted CCTV stills of dumpers behind a plastic sheet on the wall of a particularly notorious litter blackspot in the north inner city.

Areas prioritised in the smart enforcement interventions plan will include parts of the Border region which have been particularly beset by the dumping of fuel-laundering waste and equipment. Information released by the Department of the Environment in January showed that over €5 million was spent cleaning up chemicals and by-products left by fuel laundering in Monaghan and Louth between 2011 and 2015.

A number of other State agencies have already identified uses for drones in their day-to-day activities, such as the Dublin Fire Brigade and the Defence Forces. Drones fitted with thermal imaging cameras can help firefighters to identify the core of a blaze, and they have also proven useful as scouts in military combat situations.