Is your water from a private supply? EPA finds these are among worst for quality 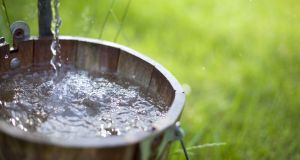 Small private wells have the worst E.coli contamination levels, according to a report by the Environmental Protection Agency. Image: iStock

Private water supplies including those serving rural schools, hotels and hospitals offer some of the State’s worst quality water, the Environmental Protection Agency has warned.

One fifth of the country’s population get their drinking water from small private wells, according to the report from the agency, Focus on Private Water Supplies.

Such wells are vulnerable to contamination from leaky well covers, foul surface water, animals getting into rivers and streams, and pollution from septic tanks, slurry and chemical or fuel storage, it said.

Farmers should also be aware of minimum distances for land spreading and pesticides or other chemicals should not be used around a well or surface water abstraction point.

Boil-water notices were imposed on 94 private wells during 2015 affecting more than 5,400 people, while 60 were contaminated with human or animal waste at least once during the year.

Testing showed that wells supplying commercial businesses or to buildings where the public has access – such as schools, creches and campsites were at greatest risk.

The report’s key findings include:

Thirty private group water schemes and 864 small wells were not monitored by councils for E.coli in 2015, including 270 serving hotels and restaurants, 99 schools and childcare centres and 23 nursing homes.

Enforcement action was also taken against 93 public group water schemes in Co Clare; 77 in Co Leitrim and 66 in Co Mayo.

Public and private group water schemes should have disinfection in place at all surface water supplies. Where chlorine is used, they should ensure that chlorine can still be detected by every customer served.