Why were these wild boar killed? Readers’ nature queries 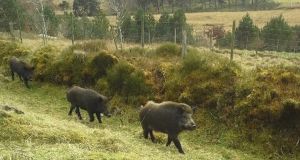 Eye on nature: the three wild boar that Sarah Proctor saw near the Sally Gap, in Co Wicklow 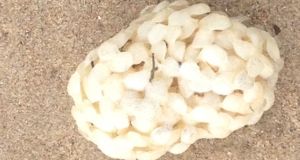 Eye on nature: one of the common-whelk egg capsules that Fiona Murray saw on Morriscastle beach, in Co Wexford

We saw a female wild boar and two young in the Wicklow Mountains on the road near the Sally Gap. The sighting was reported to the authorities. I received an email from the National Parks and Wildlife Service saying that “a rapid response was initiated and those animals were dispatched”.
Sarah Proctor
Blessington, Co Wicklow

Wild boar are regarded as an invasive species and an animal health hazard, as several swine diseases are associated with them. The policy devised by Invasive Species Ireland, a joint venture between the Northern Ireland Environment Agency and the National Parks and Wildlife Service, to stop their establishment in the wild is to prevent their private release and to “dispatch” them when they are found.

Lots of the clusters in my photograph were washed up on Morriscastle beach, in Co Wexford.
Fiona Murray
Dún Laoghaire, Co Dublin

They are the egg capsules of the common whelk. There is a fishery for them in the Irish Sea, from Dublin along the southeast to Waterford.

I had a lot of frogspawn in my pond. When I went to check progress I noticed a lot of black tadpole-like shapes, but they were not moving. Why?
Frieda Meaney
Beara, Co Cork

There may be something wrong in the water, or a cold night may have killed them. These are the usual causes of mortality in tadpoles.

I saw two black-headed gulls at the edge of Claremont Strand, in north Dublin, splashing their feet in the water while stationery and seeming to feed on whatever emerged.
Donal O’Connor
Sutton, Dublin

Black-headed gulls paddle to disturb invertebrates that live in the sandy mud.