Ireland’s mitigation plan must be in place by June. Environmentalists say it could be too little, too late 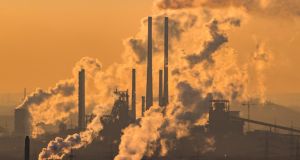 Next week Minister for Climate Action Denis Naughten is expected to launch a “national climate dialogue”, as part of the process of putting together the plan to mitigate Ireland’s greenhouse gas emissions, which has to be submitted to the Government by June 10th.

The national mitigation plan, which is a requirement of the Climate Action and Low Carbon Development Act 2015, must set out how Ireland will tackle climate change, explaining how harmful emissions will be reduced from transport, buildings, energy production and agriculture in line with European Union targets.

For many environmentalists the plan has been a long time coming, and some fear that it will not go far enough.

“This is Ireland’s fourth climate action plan, and it is 10 years since the last one – the National Climate Change Strategy 2007-2012 – was published. We really need concrete action now to reduce greenhous- gas emissions if you consider that the last action plan expired five years ago and nothing has been done since then,” Oisín Coghlan, director of Friends of the Earth, says.

Naughten says he wants not to preach to people about climate change but to get their views, so that we can work together to become a low-carbon, climate-resilient, environmentally sustainable economy. “The reality is that we are on a journey seeking a carbon-free impact from human activity, and the only way this will succeed is through social acceptance and engagement,” he explained recently.

But environmental commentators believe that, rather than bringing people on a journey to a low-carbon society, the national mitigation plan should provide strong leadership, especially as Ireland’s greenhouse-gas emissions are rising rather than falling in some sectors.

They rose by 4 per cent in the transport sector in 2015, for example, and are expected to rise by up to 10 per cent by 2020. Not reaching our emissions targets for 2020 could result in Ireland facing fines of more than €1 billion.

Prof John Sweeney, a climate-change expert and former president of An Taisce, says the Government’s record does not auger well for the final national mitigation plan.

“The briefing document published in February lacks ambition and has a lot of qualifications about what might and might not be possible on economic grounds. It even acknowledges that we will fail to meet some of our 2020 targets,” he says.

Sweeney adds that the plan needs to set out exactly how the Government will enforce reductions in greenhouse-gas emissions, particularly in transport and agriculture.

“The Government needs to take on the vested interests who want to keep things going as they are. The intentions of the Climate Action and Low Carbon Development Act are to decarbonise energy, transport and housing by 2050 and transfer all our carbon offsets to agriculture.”

He says that although there is some progress on electricity produced from renewable energy, the fact that Bord na Móna will not stop turf production until 2030 runs counter to a national mitigation plan.

Coghlan says that “we need action now on community ownership of renewable energy. Solar power offers a unique opportunity for citizens and communities to take part in the renewable transition and provide diversification for our electricity generation.”

The nongovernmental organisation Stop Climate Chaos says that the Government needs to realign transport investment to reduce emissions, by providing more money for public transport, and for footpaths and cycle paths, and less for roads.

“It’s time for the Government to put money into its Smarter Travel national policy, so that 500,000 more people can stop using cars to travel to work,” Coghlan says.

Eamon Ryan TD, the leader of the Green Party, believes that Ireland will miss out on investment opportunities and fall behind other European countries if the Government does not provide strong leadership on reducing greenhouse-gas emissions through the national mitigation plan.

“Ireland is opting out of climate ambition, and Europe is starting to notice that this country lacks meaningful efforts on tackling climate change,” he says. “There is a €200 billion fund for clean energy in the European Commission investment plan that we can tap into. For example, we need an action plan that will encourage investors to put renewable-energy heating systems in one million homes in Ireland. We need an extensive charging network for electric cars, and we need to invest in solar and offshore wind resources, which are perfectly attainable and economically viable supplies.”

The Environmental Protection Agency and the Climate Change Council, both of which contribute to Government policy on climate change, have said that nothing short of transformational change is required to move Ireland to a low-carbon, climate-resilient sustainable society.

“There is need for radical actions so that it can be brought home to people that it’s not a case of business as usual, and lifestyle changes will be required to have a sustainable future for the next generation,” Sweeney says.