Michael Viney: Why hedges need seeing from both sides 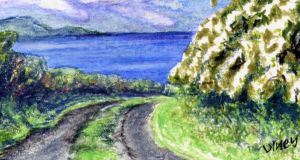 Mayo has more than 12,000km of hedges, one-fifth of them along roads. Illustration: Michael Viney

If I were a farmer with a few windy gaps on the land, I could plant new hedges and be paid for it – up to €5 a metre for five years. The hedge could be hawthorn or blackthorn, with a holly or two, and at least 10 metres long. A farm is allowed up to 20 of them. They need to be trimmable from both sides, including any facing on to a road – and they need to be finished, as it happens, by the end of this month.

Not being such a farmer, engaged with the Department of Agriculture’s Green Low-carbon Agri-Environment Scheme (GLAS), I skulk behind hedges already far older than I am. It’s a century since hawthorn quicks were pressed into our acre’s banks and now, neglected and storm-sheared, the aged bushes lean like dancers locked in mid-leap. I laid some of them in the early days here.

Much of the fuchsia has been my own rash embellishment, but one tall rampart of this manic shrub has long pressed against the road. For years I sheared it myself in summer, aware of how it might shape a driver’s sightline on the curve. Later, with rather more to do, I left it to the county council’s hedge-cutter, while wincing at its bone-breaking clatter as it chewed along the hedge.

It’s been a while since I heard that in any month of the year, and drivers seem just to slow down a bit until they can see a clear road. Perhaps the council has to choose between sending out the hedge-cutter and keeping potholes filled along the Wild Atlantic Way.

Mayo has more than 12,000km (7,456 miles) of hedges, one-fifth of them along roads: the highest share of any county. It also had most farmers in the Rural Environment Protection Scheme, the one that came before GLAS, when Teagasc pledged thousands of new kilometres of native hedgerow on some 15,000 farms “throughout every parish in Ireland”.

So, with all this proper and creditable enthusiasm for Ireland’s hedges, where did the new Heritage Bill come from? Its proposed amendments to the Wildlife Act have brought wildlife NGOs, bird-lovers and beekeepers waving placards in rare and united protest at the doors of the Seanad.

It began in 2011 as one of 102 “Actions for Biodiversity” conceived when Jimmy Deenihan, TD for North Kerry, was minister for arts, heritage and the Gaeltacht. One action was to review the legal controls on hedge cutting and hill burning. The closed period for both has been between March 1st and August 31st, a restriction common to Britain and Northern Ireland.

Quite how a change to either regulation could have any but a negative impact on biodiversity is beyond me, but there had been strong local pressures for changes or concessions. When Heather Humphreys, TD for Cavan-Monaghan, became Minister, she invited submissions from “stakeholders” and the public.

The consultation document was a good one, I thought, its questions soundly framed. Controls on cutting and burning, as it said, were not just about protecting nesting birds, either in hedges or on the ground, “but a range of biodiversity that contributes to food chains and wider ecosystems.”

Landowners argue that since birds have generally left their nests by the end of July, the season for hedge-cutting should start then. The trend to earlier nesting as climate change brings earlier springs may seem to strengthen the point. But the proposed cutting dates could threaten birds like the yellowhammer, already in decline, that still have hedgerow chicks in August. As for the bees, early nectar comes from blackthorn, now bursting into bloom, and from fuchsia bells in August.

The most vocal rural argument, endorsed by Ms Humphreys, has been on road safety, as summer hedges hide road signs, intrude on blind corners and brush cyclists and walkers. But the Roads Act already allows cutting at any time if it’s needed for safety reasons. As proposed in the Seanad, local authorities can be given both the job and environmental control.

The Heritage Bill changes are presented as a two-year “pilot scheme”, with the option to drop them after that. But, as the Environmental Protection Agency (EPA) challenged in a letter to the National Parks and Wildlife Service (NPWS, such steps should have a scientific basis for their merit – research before, not after, the Act.

On her showing so far, the Minister is not greatly into science or nature: she’s a party politician. The NPWS is tucked away in the absurdly overstuffed departmental holdall of Arts, Heritage, Gaeltacht, Rural Environment and Rural Affairs, of which the arts impress as the most effective lobbyists. The National Parks and Wildlife Service, it seems to me, would find a better and safer home with the EPA. It won’t happen.