What happens if you make the wrong choice 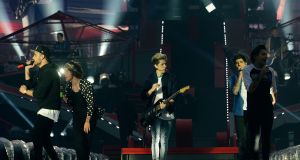 Niall Horan pursued his dream of a career in music. Above, performing with One Direction at Croke Park in 2014. Photograph: Dave Meehan

Is that really what you dreamed as a kid?

Or did you hope one day

That you’d find a way

The job is inherently crappy

Don’t be a lawyer!

In the American musical comedy show Crazy Ex-Girlfriend, the protagonist Rebecca Bunch has an epiphany: law isn’t for her. Well-established in her legal career, she realises it was never really her dream: it was her mother’s. So she decides to jack it all in and open up a pretzel stand instead.

What if, like Rebecca, you make the wrong call on the CAO form? Does it doom you to a career you hate? And is there any way out?

Frank* was in his late 20s and had been working at a big accounting firm since graduating from college seven years earlier. “I was working late one evening, as I often did, when one of the partners came to my desk,” Frank recalls. “He was overweight, in bad health and radiated misery. He said: ‘Frank, you’re really talented. You’ve got the potential to make partner. But I’ve noticed that you’re never really here at weekends, and unless you start working on Saturdays and Sundays, you’re not going to make that next step.’ I went home and thought about what he said. The next day, I resigned. Now I’m not partner but I work in a firm that respects work-life balance, offers good promotional opportunities and has plenty of perks. I get to see my family.”

Dubliner Sorcha Nic Mhathúna (35) has had a circuitous route to her current job. “I didn’t know what I wanted to do in college. A friend had gone for business and legal at UCD, so I followed suit. I soon realised that the statistics and accounting were quite hard for me and I hadn’t really made the right choice. I enjoyed the marketing side, but wouldn’t have chosen this degree if I could start afresh. I got very involved in the University Observer newspaper and got a part-time job in the RTÉ newsroom, which opened my eyes to a career in media. After college, I worked for over three years as a sub-editor and features writer. I loved it but grew tired of the late-night and weekend shifts and staggered time off, so I looked to change.”

Nic Mhathúna applied for the full-time postgraduate course in primary teaching at St Patrick’s College in Drumcondra. “I always had an interest in education and loved reading The Irish Times education pages. I had an inheritance from my uncle which allowed me take the time out and, as he was a teacher, it felt like a good move. I loved the course and learning about education and doing teaching practice. I ended up coming top of the class. But all along I had been gradually realising this was not for me: I’m an atheist and disagreed with having to pretend to be religious to work as a teacher in 90 per cent of schools. It’s hard to explain but I knew I had rushed into it. I wasn’t sure it was the career for me. To be a teacher you have to want 100 per cent to be there, otherwise it’s not fair to the children. I was embarrassed because everyone had seen me change career and now they could see it wasn’t the answer I had been looking for.”

What to do next

Taking stock, she wondered what to do next. “I felt a little lost. I spent a month or two volunteering and then applied for a media and communications role with Oxfam. I ended up working with them in a paid role, and by the time I left in 2016 I was communications manager. It was a role where I was able to draw from my previous experience and skills in college and in journalism. I was happy in Oxfam and I wasn’t looking to move but a job as child health communications manager with the HSE came up and brought together my interests in writing, content design, editing, research, marketing, and children and education. We recently launched new pregnancy and child health website mychild.ie. I feel that my varied career shows that it doesn’t necessarily matter if you make the wrong CAO call: you’re not trapped.”

Clara*, a 34-year-old vet, begs to differ. She didn’t always dream of becoming a vet and, at the last minute, opted for veterinary medicine over human medicine. “I was in fourth year when I realised I had made the wrong decision. At that stage, I was so close to the finishing line that I wanted to give myself a chance. I should have stuck with my gut feeling and changed direction back then. I regret it because of the pay, which is ridiculous for the stress, knowledge and hours. Moreover, dealing with the general public is not my forte. I think I’d do the job if I didn’t have to interact with people. Despite some professional body claiming that being a vet gives you a vast choice of life skills, I’m trying to find my way out since 2016 but haven’t yet succeeded.”

Jane Downes, founder of Clearview Coaching Group and author of The Career Book, sees clients from a variety of backgrounds who regret their career choices. “My brother got his law degree, did a postgrad, and changed to psychology. I’m hearing from solicitors who say that they’re under pressure to increase the number of billable hours per week, and they’re saying this isn’t why they became lawyers. I’m seeing the same in business and finance. From GPs, I’m hearing that they love medicine but that they’re overworked and stressed. I meet an equal amount of teachers leaving the profession and others looking to get into it: it’s a vocation and can be tough, with exiting teachers saying students’ attention spans are damaged and they can’t listen as much anymore. These days, if you decide a vocation isn’t for you, you can do a masters, or conversion course. The key is upskilling and understanding the transferability of your skills – all is not lost.”

What happens if you make a wrong turn?

Filling out that CAO form is very challenging and students often don’t know what they want. “Choosing what to study in third-level is one of the biggest decisions you’ll make as a young person and CAO regret is very common,” says Betty McLaughlin, guidance counsellor at Coláiste Mhuire CBS Mullingar and a former president of the Institute of Guidance Counsellors.

Indeed, about one in six students drop out of first year in college or do not continue into second year, and research published in 2015 by the National Forum for the Enhancement of Teaching and Learning found that more than 57 per cent left because they had chosen the wrong course, or because the course was not as they expected it to be.

There can be a view that only broad courses like arts, science, commerce and law allow students the flexibility to take on a wide range of jobs when they graduate. But Jane Downes of Clearview Coaching Group says students who regret taking on a more vocational course, such as medicine, veterinary medicine or architecture, do have options.

“During the recession, architects were one group of people who had to reexamine their career path. They were on their knees and really had to look at what they were doing. So they assessed their skills – very creative, a good eye for detail – and some of them changed to other fields, such as creative technical design or visual and graphic design. Whatever the career, anyone who is willing to do a little more upskilling and show employers they are flexible won’t be stuck. It’s important for them to consider their transferable skills, such as how they work with customers or numbers, how they can think, or how they research and work with teams.”

McLaughlin points out there’s more to third-level than the degree you get: the skills required by employers, including a positive attitude, teamwork, self-management, resilience and thinking skills are not just developed on a course, but through getting involved in clubs and societies in college. “One of my former students, Niall Horan, did not do his Leaving Cert at all. I advised him to pursue his dream with One Direction, and now he’s a multimillionaire pop star.”

If you do make the wrong call, there are several escape routes. “Post-Leaving Cert courses such as pre-nursing and science lab skills can prepare students for the more intensive college courses. There are white-collar apprenticeships in insurance, accounting, computers and engineering, as well as more traditional craft trades in areas like motor mechanics and carpentry which can lead to a lucrative career. There are opportunities for internal transfers from one course to another within the student’s current college. Many conversion courses for postgraduate students give credit for prior learning and allow students to change their career path. Finally, it’s worth noting that education is for life and there are multiple opportunities for mature students [23 and over] and grants and initiatives that can support them.”