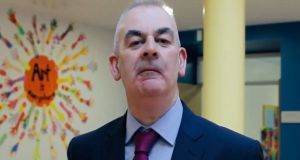 John Boyle: “We must grow in membership and influence, strengthening ties with sister unions and professional organisations and delivering additional services to members.” File photograph: YouTube

A Dublin-based school principal has been elected to lead the Irish National Teachers’ Organisation (INTO) from next year.

John Boyle, principal of St Colmcille’s in Knocklyon, will take over from general secretary Sheila Nunan in September 2019.

Ms Nunan announced her intention to step down from the position earlier this year, triggering an election for a successor.

Three candidates were nominated by union branches to contest the election which took place in recent weeks.

A total of 18,147 members of the union cast a ballot in the election. Mr Boyle won the contest with 53 per cent of the vote on the first count, followed by union officials Alison Gilliland ( 28 per cent) and Deirdre O’Connor ( 19 per cent).

Mr Boyle said he had a clear vision for the INTO over the next decade and pledged to be “bold and ambitious” in demanding the level of investment in education that will “remove the inequities that currently exist and give every teacher and pupil the room to bloom”.

“We must grow in membership and influence, strengthening ties with sister unions and professional organisations and delivering additional services to members,” he said,

Ms Nunan congratulated him on his election and looked forward to working with him over the coming months.

“Now that the country has recovered, we must lead the fight to end pay inequality for our newer entrants, we must stand up for our stretched school leaders and demand the investment in education necessary to deliver a world class education for our young,” she said.

The position is tied to the assistant secretary grade in the civil service, where the first point of scale is €127,623.

Mr Boyle was born in Mullaghduff, Co Donegal, and now lives with his wife Carmel in Templeogue, Dublin.

He has been an INTO activist for more than 30 years, serving as a staff representative branch and district chairman as well as on the union’s central executive committee since 2004.

Mr Boyle has been principal at Colmcille’s JNS Knocklyon since 2000 and was previously a class teacher and home school community liaison co-ordinator at Scoil Mhuire, Ballyboden, between 1986 and 2000.