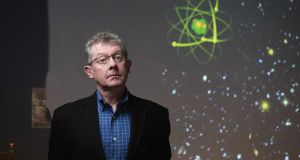 Prof Séamus Davis graduated with a BSc in Physics at UCC in 1983 and has since gone on to become a leading global figure in the field of quantum matter. Photograph: Clare Keogh

The first in a series of world-class academic appointments aimed at capitalising on Brexit and uncertainty in the US is to be announced on Wednesday.

UCC has made a joint appointment with Oxford University of a leading experimental quantum physicist, Prof Séamus Davis.

The appointment is being supported through a Science Foundation Ireland research professorship, which provides for top academics and researchers to be appointed on salaries of up to €250,000.

They believe uncertainty in the UK and US scientific communities due to the combined effects of Brexit and US president Donald Trump’s controversial policies has the potential to make Ireland a more attractive location.

Latest figures indicate there has been a huge fall-off in international students in the UK due to a perception it is not as welcoming as before, while there has been a 30 per cent increase of applications in Ireland.

In a statement, he said the rapidly accelerating “second quantum revolution” promises transformative advances in science, industry, economy and society.

“In Ireland a spectacularly sophisticated research ecosystem has been nurtured and has rapidly grown, and I am very much looking forward to returning home to Cork and to working with my colleagues in UCC,” he said.

Irish policy-makers hope the appointment will enhance our reputation for quantum materials and quantum technology research, as well as enhance the training and experience of the early-career researchers involved.

John Halligan, Minister of State for Training, Skills, Innovation, Research and Development, said the appointment was a “significant achievement for Ireland”.

“Recruiting world-class researchers that have led groundbreaking research developments is a priority for the Irish Government, as is fostering partnerships with both national and global institutions,” he said.

Prof Mark Ferguson, director-general of Science Foundation Ireland, said the appointment would bring a wealth of knowledge and expertise in quantum physics to Ireland.

UCC president Prof Patrick O’Shea said Prof Davis’s work at the interface between discovery and innovation will be crucial in advancing us into this “new age of opportunity”.

Prof Davis graduated with a BSc in Physics at UCC in 1983 and has since gone on to become a leading global figure in the field of quantum matter.

For the past 10 years Prof Davis was based at Cornell University and was senior physicist at the Brookhaven National Laboratory. He is a fellow of the prestigious US National Academy of Sciences.

His research achievements to date include the design and demonstration of the first spectroscopic imaging scanning tunnelling microscope, the invention of quasiparticle interference imaging, breakthrough work on the Cooper-pairing mechanisms of correlated superconductors, discovery of the superfluid Josephson effect, and the discovery of several new phases of electronic matter.