Universities get green light for salaries over €335,000

More the 70 staff across third-level colleges are earning salaries in excess of €200,000 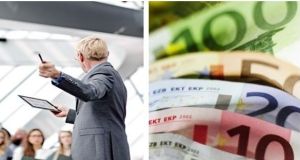 The Government last year provided a special derogation from public sector pay restrictions to help universities hire world-leading researchers on salaries of up to €250,000.

Universities have received Government approval to recruit top academics on salaries of up to €337,000 a year.

Under public sector pay rules, salaries for public sector employees in general are capped and individuals may not earn more than the Taoiseach’s annual €190,000 salary.

However, universities may seek approval to pay staff on salaries in excess of this on case-by-case basis.

The best-paid academic is UCD’s Prof Boris Kholodenko, deputy director of the the university’s systems biology centre, who earns €336,927 per year.

The Russian-born academic is involved in cutting-edge work that is deepening understanding of cancer dynamics.

Another top earner is Prof William Wijns, an expert in cardiology at NUI Galway, who is a professor of medical devices. He has a salary package of €250,000.

He is spearheading a €5 million research project aimed at developing wearable sensors to alert patients at high risk of heart attacks to triggers such as stress.

Director of UCC’s clinical research facility Prof Joe Eustace is another high-earning academic on a salary €218,716.

Overall, an Irish Times analysis reveals that overall there are more than 1,000 staff across the higher-education sector earning in excess of €100,000.

In addition, more than 70 staff across third-level colleges are on salaries in excess of €200,000.

Academic medical consultants account for the bulk of these appointments. Their salaries are paid for by the HSE and their affiliated higher-education institutions.

These posts – typically between €200,000 to €230,000 – do not require Government approval as the salary scales allow for staff to be paid more than the Taoiseach.

Universities are competing more and more in an entrepreneurial world economy. They need to be freed to compete effectively by greater flexibility on salary levels

Separately, 17 senior academics have been hired on salaries ranging from €140,000 to more than €300,000 under a rule known as the “departures framework” .

This requires universities to establish Government approval before hiring staff outside of public sector pay caps.

Universities say they are facing significant difficulties attracting top academics under public sector pay rates and have argued for the limits to be increased.

“Ireland needs to be able to compete for the best talent in the market if we want to be truly world class,” said Jim Miley, director general of the Irish Universities Association.

“ The best way to do this is to provide much greater flexibility to individual universities . . . Universities are competing more and more in an entrepreneurial world economy. They need to be freed to compete effectively by greater flexibility on salary levels. That will ultimately provide the best value for money for the State’s investment in talent.”

The Government last year provided a special derogation from public sector pay restrictions to help universities hire world-leading researchers on salaries of up to €250,000.

This will allow for the recruitment of up to 10 research professors at any one time in areas of economic importance such as science, technology, engineering and maths.

The Irish Federation of University Teachers, however, said paying large sums to a small number of research staff was “no response” to a decade of policies that have subjected low-ranking researchers to cost-cutting measures.

“The crisis of attracting and maintaining qualified lecturers and researchers will only be reversed by a recommitment of the exchequer to provide adequate resources,” said the federation’s general secretary, Joan Donegan.