Young demonstrate appetite to learn about religion in schools 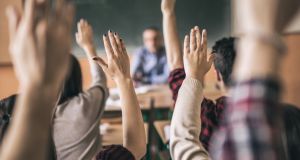 It’s time to talk about religious education. Last month, Minister for Education Richard Bruton published a circular setting out new arrangements for children who do not want to participate in “religious instruction or worship” in State-run schools.

A key change is that those who do not want instruction in line with the requirements of any particular religion should be timetabled for alternative tuition throughout the school year, rather than supervised study or other activities.

The opportunity for a fruitful discussion about the nature, scope and purpose of religious education (RE) in schools has unfortunately been overshadowed by the debate about the complex relationship between religious trusteeship, patronage, and a publicly-funded education system.

Historically, the State provided for religious instruction, understood as formation, within a religious tradition.

How this was taught was the responsibility of the faith communities and not accountable to the State. The constitutional provision for the right of parents to withdraw their child from religious instruction underscores its religiously formative nature.

However, as noted by other commentators, religious education is an educational activity that is distinct from, though in some instances related to, religious instruction.

The move toward a religious education that is not necessarily aligned with faith formation emerged after the Education Act of 1998 allowed for the development of a State curriculum for RE at post-primary level.

Since 2000, the development of a number of syllabi for RE that may be studied by second-level students of any faith or worldview marks the beginning of the shift from understanding the learning and teaching of religion as solely the task of the faith communities to appreciating it as a legitimate activity within the public domain, the implications of which have yet to be fully realised both by the faith communities and by the public.

Positioning RE then in the public space necessitates greater public discussion about the role of the State in RE and how it responds to the diversity of worldviews, religious and otherwise, among both students and teachers, that characterise the contemporary classroom.

Educating teachers as RE specialists for post-primary schools has been happening in Ireland for more than 50 years. So a significant expertise in response to the needs of various school types and changing contexts has evolved.

There are many examples across the country of inclusive practice that responds to local contexts.

Such practice is based on various perspectives of how RE can contribute to the religious, spiritual and moral development of a person, how RE can develop a basic religious literacy about religions and beliefs, how RE can encourage people to be sensitive to, know about, and understand religion and the religious dimension of life, how RE as an interreligious and intercultural activity can be tolerant and respectful of the variety of existing religious and non-religious convictions, traditions and worldviews.

The sense among religious education teachers is that it would be unfortunate if students are denied an opportunity to engage in such an education.

The principles underpinning this engagement need to be the subject of a more public conversation about RE.

In a democracy that respects freedom of religion students and their parents must be supported in exercising their right to opt-out; the question is what do people think that they are opting out of?

The implications of the directive mean that some young people may not be afforded an opportunity to engage in these questions with their peers. In a multibelief and multicultural society, religious education might well provide the only space where people can learn with and from each other as they think deeply about the variety of religious and other responses to life’s questions.

Across Europe there is an increasing expectation that RE in the public space will equip students for responsible citizenship by helping them to cope with and engage constructively in a pluralist society.

Developments such as the Toledo Guiding Principles on Teaching about Religions and Beliefs in Public Schools (OECD, 2007) situate teaching about religion in public schools in the context of a human rights framework and a commitment to religious freedom.

Through its work on Signposts, policy and practice for teaching about religions and non-religious worldviews in intercultural education (2014), and Competences for Democratic Culture, on living together as equals in culturally diverse democratic socieities (2016), the Council of Europe promotes teaching about religions as well as the development of sensitivity and respect, literacy and understanding.

These documents suggest a number of themes helpful for a public discussion about RE in Ireland: the contested use of terminology, stereotyping of religions, education and extremism, discrimination on the grounds of belief or non-belief, the internal diversity of religions, religions as distinct phenomena, dealing with truth claims in a classroom, media representations of religions and creating a “safe space” for dialogue in a diverse classroom.

The voice of the student

It is worth noting that the dominant voices in the debate are those of adults seeking to either ensure the place of religious education within the school or those opposed to it.

The various voices of the students themselves, who are agents in their own learning, are too often muted.

Research in Europe and Ireland demonstrates that many young people value the place of religious education in schools and want an opportunity to learn and talk about religion and belief in schools.

Young people do not necessarily adopt their parents’ beliefs or viewpoints so see the classroom as a potential “safe space” for them to reflect on their own convictions.

They appreciate skilful teachers who can provide accurate information and manage discussions, which include significant differences in viewpoint, including secular humanism and other non-religious philosophies as well as minority religions.

All good RE invites people into a conversation with differing viewpoints, differing truth claims, and different versions of what it means to be religious, to be a citizen, and to be human. It is unfortunate that the directive bypassed such a conversation.

The starting point for this conversation must be based firstly on a respectful acknowledgement that people have a legitimate right to freedom from religion as well to freedom of religion and, secondly, that education in schools is a partnership between students, parents/guardians, teachers, patrons, and the State.

Such partnership calls for a new humility in what is too often a polarised conversation. It’s time to talk about RE.

Approach to tackling Covid-19 may be based on ‘biased’ studies, research warns