Mind the gap: Tackling the class divide at third level

Poorer students less likely to go to college. But how can we narrow the gap? 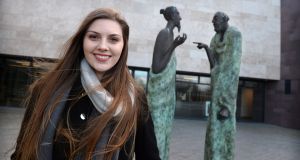 Weronika Nowak, a student from Ballyfermot, who is studying law and social justice at UCD. “When I was in school, it was almost assumed that the majority wouldn’t go to college,” she says. Photograph: Dara Mac Dónaill

On paper, at least, the odds were stacked against Weronika Nowak going to university.

She arrived to Ireland from Poland at the age of 13 without a word of English. She went to school in Ballyfermot, a disadvantaged area with low progression rates to third level. Her school didn’t offer higher level options in many subjects.

Despite these obstacles, she is now in her final year of a law and social justice degree at UCD.

The university’s access programme, she says, was crucial in guiding and supporting her to college.

As a result, she’s in a better place than most to identify what we need to do to narrow the class gap at third level and increase representation of less well-off young people.

“When I was in school, it was almost assumed that the majority wouldn’t go to college,” says Nowak. “People from well-off families can get grinds to help them do well in the exams and this gives them an advantage. Even if we can get the points, the grant doesn’t cover the cost of college at all, especially not for students who might have to move away from home. I’ve worked every summer and over holidays to pay the costs of third level.”

Yet, despite attempts to increase participation among under-represented groups such as those from poorer families, people with disabilities and ethnic minorities, a major class gap persists.

Almost all children of higher professionals progress to college; this falls to just a quarter of those from semi-skilled or unskilled families.

The Higher Education Authority’s National Access Plan for Higher Education 2015-19 has promised to increase numbers from disadvantaged backgrounds. But will it make any serious headway where other plans have failed?

Initially, the biggest flaw in the national access plan was that it did not provide any ring-fenced funding. This changed last year with the announcement of three funded strands.

For example, third-level institutions have joined together in regional clusters to develop imaginative ways of improving third level access for up to 2,000 students from underprivileged backgrounds.

This is a competitive process: proposals deemed strongest will get the most funding.

Meanwhile, under a new funding “compact” between the Higher Education Authority and the higher education institutions, colleges will be financially rewarded for meeting access targets.

But many of those involved on the ground in boosting the number of under-represented groups feel these measures don’t go far enough,

“How will that be sustained over the long term?” she says.

A much greater focus, she says, is required on increasing the number of alternative pathways from further education to third level.

Olive Byrne, UCC’s access officer, queries the focus on higher education when the plan should look at education at all levels.

“ If reading scores from a local primary are below average, that’s where the targeting needs to happen,” she says.

“There does not appear to be much political will to really put money behind changing progression rates. Public funding of teacher salaries in private schools has a long-term social cost, giving an advantage to those who do not really need it,” she says.

“ Changing progression rates cannot be done by schools or higher education institutions alone, but we can use our human and intellectual resources to help Deis schools effect change in their institutional culture.”

She says there is also the wider challenge of integrating access students into colleges.

“They are adapting to the dominant culture rather than being given a chance to demonstrate the cultural and social capital, including educational resilience and life experience, that they have to offer,” she says.

There have, however, been encouraging trends at local level, which are mostly thanks to targeted initiatives by individual colleges.

Most higher education institutions aim to have at least 25 per cent of their undergraduate student body comprised of mature students, students with disabilities and students from disadvantaged backgrounds.

When it comes to the latter, at least, Dublin City University has made the greatest strides, with 11 per cent of all undergraduates gaining entry through the Higher Education Access Route (Hear) programme.

DCU is closely followed by Maynooth University, with 9.6 per cent of students accessing the college through Hear.

This doesn’t capture the full picture as some of these colleges do proportionately better in other categories, such as students with disabilities or mature students.

DCU president Prof Brian MacCraith says the key to successful access programmes is providing supports before and during college.

“Financial barriers can prevent individual students going to college. When they do get here, we want to minimise the chance they will take part-time jobs, and so we raised €1.3 million through the DCU Educational Trust, from individuals, corporations, some of our staff and alumni, and we use this to provide support to the students.”

Evidence shows that once access students get through their first year of college, they are slightly more likely than their peers to stay in college – perhaps because they realise the stakes are high and because they don’t have the same safety net as middle-class students.

For Nowak, the real challenge to narrowing the class gap is dismantling the barriers that face young people in disadvantaged communities, providing practical supports in school and supporting them to raise their aspirations.

“Students from well-off families are so much more familiar with the CAO and college systems, and it’s often easier for them to travel because they have cars. I have to travel for between three to four hours every day to get to and from college,” she says.

“I was lucky that my school was linked to UCD and so I heard about the Susi grant, and the Hear and Dare [Disability Access Route to Education] programmes to support students from disadvantaged backgrounds and students with disabilities,” says Nowak.

“Through UCD’s FutureU programme, I had a mentor from UCD who gave me information about third level and financial supports. They encouraged college as an option and worked to break down stigmas associated with it.

“Now I’m a mentor for other secondary school students. I tell them that education is just a beginning and that it is the way out of low-paid jobs and inter-generational poverty.”