Unequal pay for teachers leading to ‘brain drain’ from the profession 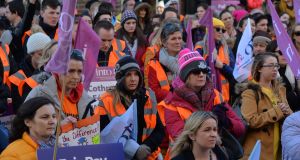 Teachers from the INTO, ASTI and TUI protesting before a Government report on pay equalisation. Photograph: Alan Betson

Unequal pay for teachers is causing a “brain drain” which has the potential to seriously undermine children’s education, trade unions have warned.

The claim was made at a protest outside the Dáil on Wednesday which called on the Government to restore pay equality for newly qualified teachers.

Teachers hired over the past seven years are on lower pay scales due to austerity-era pay cuts.

The Department of Education says full restoration of pay for teachers would cost €130 million a year.

All three teachers’ unions have insisted that they want to see a “pathway to pay equality” in advance of teachers’ annual conferences, which are due to take place over Easter.

A report on the issue of lower pay scales for new entrants – required under the terms of the public sector pay deal – is due before the end of this month.

Association of Secondary Teachers, Ireland (ASTI) president Ger Curtin said unequal pay was leading to a crisis in the supply of teachers and the emigration of young teaching graduates.

“Young teachers are being punished by an unfair pay scale and are voting with their feet. Meanwhile, other countries are benefiting from our highly-educated, talented teachers... this is not going to stop until we address pay inequality,” he said.

Teachers’ Union of Ireland (TUI) president Joanne Irwin estimated that up to 17,000 teachers are on lower-pay scales than their colleagues for carrying out the same work.

“Graduates who might formerly have chosen teaching are now choosing other employment options,” she said.

“We are completely unimpressed by the various sticking-plaster solutions that have been suggested by the Minister and his department.”

A spokesman for the Department of Education said the progress has been made in relation to pay for newly qualified teachers with 75 per cent of the pay gap now closed.

“A teacher straight out of college now earns €36,000. The Government recognises that there are outstanding pay demands and is working with the unions under the new Public Service Stability Agreement to progress these matters,” he said.

However, Irish National Teachers’ Organisation (INTO) president John Boyle said the reality was that many young teachers were struggling on low hours and earning a fraction of the starting salaries quoted by the department.

While many young teachers were struggling to make ends meet, those who emigrated were being offered full salaries and permanent jobs.

“This damaging and utterly unfair imposition of unequal pay must be ended,” Mr Boyle said.

“The report required under the Pay and Pensions Act must be a clear first step on the road back to equality.

“We must also see the end of that road. Does the Government really believe in equal pay for equal work? It is time for them to commit to righting the wrong imposed since 2011.”

“The report on pay equalisation in the public sector is well under way and is due to be published later this month,” he said.

“Fianna Fáil will be looking for clarity from Government regarding their plan of action as soon as this report is published. It’s imperative that the Government quickly moves to confirm a proper pathway to equalise the pay for new entrants.”