Decision on Clonkeen College board will follow legal challenge 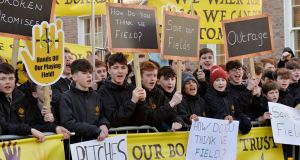 Students at Clonkeen College protesting at the Dáil on Wednesday over the proposed sale of the school’s sports pitches to developers. Photograph: Alan Betson

Any decision on whether to dissolve Clonkeen College’s board of management will not take place until after a High Court challenge over the sale of the school’s playing fields, according to Minister Mary Mitchell O’Connor.

Late last year the school board was told by Edmund Rice Schools Trust (ERST), the patron body, that it faced being scrapped over its support for a legal challenge to the sale of pitches at the Deansgrange school.

However, this move requires the approval of Minister for Education Richard Bruton to dissolve the board. This request is being examined by the Attorney General.

Minister of State Mary Mitchell O’Connor said on Wednesday that the Attorney General had “given his assurance that there will be no dissolution of the board before the High Court case”. The case is due to be heard next week.

She also said the Ceann Comhairle, Séan Ó Fearghaíl, has offered to assist a mediation process between the school and the Christian Brothers over the issue.

“The best outcome for everyone would be if all parties came to the table to reach a resolution,” she said.

On Wednesday, hundreds of students, parents and teachers from Clonkeen College protested outside the Dáil and called on Mr Bruton to intervene to help prevent the sale.

ERST requested the Minister’s permission to dissolve the board of management last January.

This followed the board’s decision to take legal action against the Christian Brothers’ proposal to sell 7.5 acres of fields, used by the school for sports, for a reported €18 million.

The trust, a lay organisation which manages nearly 100 formerly Christian Brothers schools, has accused Clonkeen College’s board of not “complying with its obligations” to protect the best interests of the school in taking its action against the congregation.

A spokeswoman for the Department of Education said Mr Bruton was still considering the request to dissolve the board.

She said the legislation “ does not specify a timeframe for this process”.

The school’s legal challenge to the sale of land is due to be heard in the High Court next week. The case is supported by members of the board of management.

Mr Boyd Barrett told the demonstration it was “utterly disgraceful” that ERST would “deliberately degrade the facilities of the school” and then attempt to “intimidate the school’s board” when they protest against it.

“Minister Bruton must get off the fence on this issue and support Clonkeen. He must flatly refuse the disgraceful ERST request to dissolve the School Board and tell ERST that it is not acceptable to sell vital school sports facilities to pay off its historic debts’’.

Earlier this year, ERST said it was forced to seek the dissolutionof the board because of its “serious concern that actions being pursued by some members of the board show poor governance and are no longer in the best interests of ERST’s schools”.