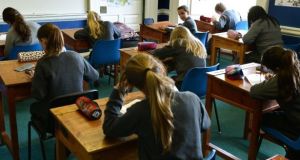 The ASTI claims the practice of holding meetings outside teaching hours is contrary to a 2015 agreement with the Government on junior cycle reforms. Photograph: David Sleator

Secondary teachers could end up teaching for longer under a plan drafted by the Department of Education aimed at ending a dispute over the timing of meetings linked to new in-school junior cycle assessments.

Last December, members of the Association of Secondary Teachers Ireland (ASTI) voted overwhelmingly to refuse to attend these meetings if they take place outside normal teaching hours.

Secondary school managers say this practice is resulting in a “staggering” loss of tuition hours for pupils and putting schools in an “impossible position”.

They are aimed at providing an opportunity for a group of teachers to share and discuss samples of their students’ work and achieve consistency in grading.

The union claims the practice of holding meetings outside teaching hours is contrary to a 2015 agreement with the Government on junior cycle reforms.

In a new development aimed at ending the dispute, the department has produced a draft circular setting out a number of options clarifying when these meetings may take place.

One option allowed, according to sources, is for Slar meeting to take place exclusively during the normal school day – as demanded by the ASTI – for a period of no less than two hours. However, in exchange, teachers would lose a large proportion of their “professional time”.

This is a reference to the 40 minutes a week – or 22 hours a year – of non-teaching time given to teachers involved in delivering the junior cycle. As a result, said one source, teachers could end up with more class tuition time than they currently have.

This professional time has been facilitated by the department by hiring almost 700 additional teachers.

The department is understood to be taking this approach on the basis that it will not “pay on the double” by sanctioning the use of paid-for substitution to cover Slar meetings during the school day.

Other options contained in the draft circular including giving schools more autonomy to decide on the timing of Slar meetings, and allowing some meetings to start during school hours and end after hours.

The proposals in the draft circular will not affect Teachers’ Union of Ireland (TUI) members, who are currently holding Slar meetings without dispute.

The ASTI’s 23-member standing committee is due to meet this week to discuss the proposals.

The Joint Managerial Body (JMB), the school management body for more than half of secondary schools, has previously estimated that allowing Slar meetings to start during class time would lead to the loss of more than 133 hours of tuition time each year in a medium-sized school.

In addition, it would lead to higher substitution costs and rising parents’ concerns around multiple “free classes” as well as student discipline issues.

Any move to have the entirety of these meetings held during class time, the JMB says, would represent a loss of four teaching hours per teacher per subject each year.

It says it would be twice that if, as is the case with the majority, teachers have a second subject.

The current dispute dates back to a 2015 agreement struck between the department and teachers’ unions.

It states that “a limited number of meetings may need to draw on teachers’ bundled time to run beyond normal school tuition hours for some of the duration of the meeting”.