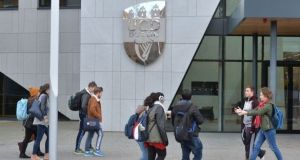 The increase would mean the cost of student accommodation on the Belfield campus rises to between €8,000 and €9,900 per year over the next three years. File photograph: The Irish Times

Students in University College Dublin (UCD) are to demonstrate over a decision by the university to increase on-campus accommodation rents by 12 per cent over the next three years.

The UCD students’ union is to hold a rally on the south Dublin campus at 9:15am on Tuesday morning in the student centre over the rent increase.

Students’ union president Joanna Siewierska said the protest would coincide with a meeting of the university management team, which would be discussing the campus rent increases.

Ms Siewierska said the students’ union is “outraged” by the decision to increase rents by 4 per cent a year for the next three years.

The protest will call for the proposed increases to be scrapped. And it will also call on the university to introduce a financial assistance scheme for students struggling to afford their rent in the private market.

“We are showing the university management team that they will not use campus residences as a fundraiser anymore,” said Ms Siewierska.

The increase would mean the cost of student accommodation on the Belfield campus rises to between €8,000 and €9,900 per year over the next three years.

In a previous statement, UCD has said the rent hikes were required to pay for the maintenance of current accommodation, as well as help fund plans to build 3,000 extra student beds on campus.

Under legislation aimed at tackling rising rents, increases are capped at 4 per cent per year in rent pressure zones, such as Dublin and other cities. These rent caps were extended to cover purpose-built student housing last year.

Separately on Monday, Sinn Féin housing spokesman Éoin Ó Broin wrote to the seven university presidents over the decision by UCD and several other colleges to increase rents by four per cent.

“Sinn Féin and other Opposition parties worked hard to force a change in the legislation to ensure that on-campus student accommodation was included in the rent pressure-zone legislation,” he said.

Recent decisions by colleges to increase rents by the maximum level permitted was “not recognising the spirit of the law,” and placing “a huge financial burden on lower and middle income students and their families”, said Mr Ó Broin.