Has obsession and privilege skewed attitudes of many in private schools? 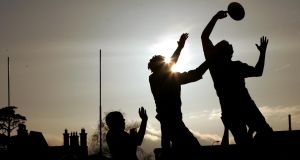 The behaviour of some supporters during recent Leinster schools senior cup games has raised broader questions over the values of many of our most prestigious schools. Photograph: Eric Luke

Next week’s Leinster Schools Senior Cup semi-finals will take place in front of an expectant crowd of thousands of students, past pupils and spectators. However, much of the focus at the rugby games will be on what is happening in the stands rather than on the pitch.

After recent matches in the competition the Leinster branch of the Irish Rugby Football Union issued a letter to schools warning about drinking and anti-social behaviour involving past pupils, as well as derogatory name-calling from the stands.

“We have been advised and have received representation from the Garda that we are at the point now where action must be taken when incidents occur,” the letter stated.

In a subsequent Irish Times article, former international referee Owen Doyle described his disgust at what he saw on the stands during school matches.

He said there were chants from some groups of supporters, such as “your father works for my father” and “we pay fees”, and verbal abuse of volunteer match officials and schoolboy players on the pitch.

Some past pupils gathered in groups, dressed to intimidate, heads covered with hoodies.

How does this sit with the professed ethos of prestigious schools? Should the events be downplayed as a case of some boys behaving badly? Or has an obsessive devotion to schools’ rugby, combined with a sense of entitlement and privilege, skewed the attitude of many students in our private schools?

None of the schools synonymous with the competition responded to requests for comment.

The Jesuits, the religious order involved in the running of Clongowes, Gonzaga and Belvedere, also did not comment.

However, the Spiritans – founders of Blackrock College, St Michael’s College on Merrion Road, St Mary’s College in Rathmines and Templeogue College in Dublin – said its school communities were “united in a commitment to holistic education underpinned by strong core values”.

In a statement from the Spiritan Education Trust, it said: “Spiritan ethos encourages students to be strong advocates for social justice in a spirit of generosity which finds expression in practical ways that are firmly grounded in care and respect for others and for the earth.”

However, Mark Boobbyer, warden – or headmaster – of St Columba’s College, a fee-charging school in south Co Dublin, believes the growing intensity of competitive rugby at school level threatens the values of some schools.

“There is an increasing tension in school sport,” he says. “Now all good sports schools employ external professional coaches. They are not school teachers with a wider perspective, and they want to win at all costs. They are not looking at the bigger picture but at winning the next match.

“How their team behaves is less important than the result. The crucial role of sport as a creator of character has been outsourced. It is bound to make a difference.”

There’s no doubt that schools rugby has changed. Students are now meticulously prepared in every aspect of preparation, from strength and conditioning to video analysis. There are 7am gym sessions, medicals and detailed training on all-weather pitches.

Once it took time for scrawny school players to bulk up and gain a foothold in the professional game. These days many schools’ players transition seamlessly to provincial academies which supply the Irish rugby team.

Arthur Godsil, former headmaster of St Andrew’s College in Dublin, feels that while the game has become more professionalised, the same hype has always surrounded the senior cup.

“I remember playing in it myself, and I couldn’t sleep for the week before the match,” says Godsil, who now runs an education consultancy firm.

He does not agree with those who argue that the competition has gone too far or that schools are not doing enough to maintain pupils’ standards of behaviour.

“People are wrong to bark up the tree of ‘schools should do better’. Schools go to extraordinary lengths to ensure there is a strong foundation of values such as charity and respect.” .

The players on the pitch, he says, are exemplary. Yet he accepts that some supporters can get out of hand.

“It’s young people being young people in a highly charged atmosphere… When you hear them singing songs and watch their faces, they are pumped up to the nth degree. The players are able to release that on the pitch, unlike the supporters.”

One senior school rugby coach and former teacher who declined to be named also feels schools are the subject of unfair criticism.

“I saw the headlines about ‘your dad works for my dad’. Articles will always focus on the few eejits getting a chant like that going. It’s embarrassing. No school, headmaster or coach wants that.

“But the criticism has to be proportionate. We have a strong rivalry with another school team, and we beat them last year. Our supporters clapped the opposing team off the pitch. It was a marvellous sporting reaction. It wasn’t organised.”

He also feels the senior cup is held up to much closer scrutiny than other competitions.

“I saw there was a riot last week involving Bohs and Shamrock Rovers supporters. Here we had a few upper middle class boys making ratty chants…I don’t like that, and at the end of a recent match I had to address something in the stand, but the criticism has to be proportionate.”

He accepts that the game is more professional now than it ever was, but even in the top schools it was still just part of a broader education.

“I think people would be surprised to see what it’s really like. We play rugby because we enjoy it…We actually train less than we used to, three times a week instead of five. That’s down to greater knowledge on strength, conditioning and recovery.

“All the main coaches in our school are also teachers. It’s complementary to a holistic education – it’s not the defining part of it…It helps to round the person in my opinion.”

Some parents, however, disagree. They point to what they describe as an unhealthy obsession with sporting success in some fee-charging schools which, they feel, can adds to some pupils’ sense of entitlement and superiority.

One parent, who declined to be named, says she opted to take her son out of a well-known rugby school when she saw the effect it had on him and others.

“The best rugby players are treated like gods. If you didn’t fit into that culture you end up being excluded, teased and bullied... He had other friends who wanted to leave but parents are often the problem themselves. They want the social networks and prestige.”

For St Columba’s, which is the most expensive day and boarding school in Dublin – with fees of up to €8,600 for day pupils – Boobbyer says sport should be about teaching values such as teamwork, resilience and respect for others.

“Ultimately every school will say that its ethos is to teach values and give young people a sense of humility...But if some schools saw their own behaviour and what they really hold to be dear in their own schools, they might be slightly embarrassed about the image that’s given out.”