Did what I learned as a debater all those years ago endure? Without question yes 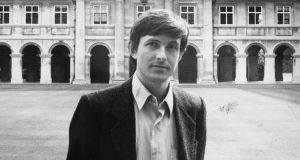 Conor Gearty outside Emmauel College Chapel in Cambridge in 1987

In my third week at Cambridge University – studying law as a postgraduate – I spoke in one of its famed “Cambridge Union” debates. The room was magnificent – a replication of the House of Commons – the atmosphere intense, and the external guests imposing.

But the debate itself was not the ordeal I had feared: the speeches somewhat predictable, the interventions from the floor merely worthy, and the audience respectful, almost quiet.

But then again I was a graduate of The Irish Times debating competitions, and had seen far worse (by which I mean, of course, better).

At The Irish Times it was not enough to be witty. You had to win too, combining style and substance: without the first you lost the audience; without the second the judges.

There might be eight or 10 speakers, but only one of them – your debate partner – was not out to destroy you by whatever verbal (or even theatrical) means were at their disposal, just as you were them. Some philosopher we were taught about in UCD had speculated about a “state of nature” where it was die or be killed. That was (only just about metaphorically) Irish Times debating.

Speaking at Belfield’s law society on a Thursday and (very occasionally) at the Literary and and Historical society (our sworn enemies, though they never noticed us much) on a Friday gave a shape and purpose to my undergraduate days. I wasn’t so strong on the playing field – but here was a sport of words, a jousting with language, with the cutting, thrusting and parrying of fencing thrown in.

Your mind needed to move fast to dodge the traps thrown in your way by your opponents, while keeping to your chosen path, all the time making your direction seem improvised, your thread of argument (carefully honed over many hours though it might be) feel like whimsy.

You had home and away matches, a team of supporters, international tournaments to qualify for, and domestic competitions to win, a premier league of the spoken word.

Did what I learned as a debater all those years ago endure? Without question yes. We lawyers are supposed to do mock trials at college, playing at being barristers before some bored, invited judges, and a lost audience respectfully stifling yawns.

But it is debate that prepares you for life, wherever you happen at any given moment to be leading it – the courtroom, the Oireachtas, the family, the workplace, the pub. Witty wordplay works everywhere.

No exercise prepares you better for the vital skill of reading an audience, knowing when to push a line that bit further, and (just as vital) when to stop: in conversation it’s good manners, in debate a matter of survival. And good debaters listen more than you might think: you need to hear properly in order to offer the right riposte.

Looking back, I think we were mainly from private schools, and mostly boys/young men (though in my time there was a fair smattering of brilliant young women). Hopefully it’s less limited these days.

What has certainly not changed is the pride we all took in our ability to argue any side of the argument, however outlandish or preposterous it might seem to be. For years I regarded this articulate promiscuity as evidence of a vacuous core that lay at the heart of all of our performances, a flaunting of our skills over our beliefs. Now I am not so sure.

Debate forces you to enter the mind of the holder of an opposing point of view ...and to propagandise for it

These days all our beliefs seem increasingly to exist in bubbles of determinedly unreflective certainty, with the art of persuasion mattering less than the solidarity secured by display of an untouchable point of view. Debate breaks that down, forces you to enter the mind of the holder of an opposing point of view, and not only that but also to occupy their space and (horror of horrors) propagandise for it.

Try it for yourself: “That America needs Trump”; “That Brexit is the right approach for Britain”; “That Ireland benefits from a hard Border” – push yourself into these foreign countries where the currency of feeling is different and the experiences that drive ideas are not your own. You’d be surprised what you find.

After an Irish Times debate final, I was in a small group of students heading to a night club somewhere around Leeson Street with the late Christina Murphy, the magnificent Irish Times journalist synonymous with the debating competition for so many years.

I don’t think I had ever been to a nightclub and must have revealed as much at the door. “You better let him in,” Murphy said briskly. “He is the Irish Times debating champion.” I had never had a prouder moment.

Conor Gearty won each of the Irish Times and Observer Mace debating competition twice, in 1978 and 1979. In Autumn 1979 he toured the United States as part of a two-person team representing the English-speaking union of the commonwealth