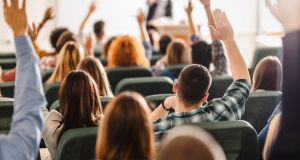 Dutch and other EU universities are ranked among the best in the world.

My son has been offered a provisional place by a Dutch university and seems to have slacked off on his Leaving Cert study. He’s no longer worried and says he’s not under pressure to get good grades. Is this really the case ?

It is ironic that your fear is being driven by his loss of anxiety over the need to secure a high CAO points score in his Leaving Cert. I often reflect on why I have never experienced the flashbacks that others recount of reimagining that they are in the exam hall resitting their Leaving Cert.

The answer is simple: I sat the exam in 1971 prior to the surge in third level application numbers which occurred following the introduction of free second level education.

Securing a place on most degree programmes on offer back then required no more than two higher level C3 grades, a not very high bar to achieve for those interested in pursuing an academic route after school. Most young people entered the labour force directly from school in those times.

How times have changed. A majority of school leavers in Ireland now progress to third level. Uniquely in the EU, we are one of the few countries where attending third level is not seen as a right, based on meeting the minimum entry requirements for our preferred course.

Programmes such as physiotherapy and psychology – which require CAO points of 540-plus in Irish universities – can be accessed with two H4/5s across EU universities taught through English.

The fear and anxiety that drives much of what occurs after transition year in Irish education derives mainly from a shortage of enough places in highly sought-after programmes to meet the numbers securing the minimum entry requirements.

We have meekly accepted this reality for over 40 years without question and find it hard to believe that our EU partner countries do not operate their third level systems on this basis.

Where your son may come unstuck in his more relaxed approach to learning is in his perception that having a relatively modest academic target means the hard part is now over.

Nothing could be further from the truth. Dutch and other EU universities are ranked among the best in the world. Attrition rates among first years on many programmes are up to 40 per cent. The academic year is up to 40 weeks long and continuous assessment begins during the first few weeks. Any let-up in study can lead to a quick exit.

Recent history would suggest that Irish students who have taken advantage of the places on offer in EU universities have lower failure rates that domestic students, partly because they really appreciate the opportunity that they have been given.

But learning to be motivated by a real interest in one’s subject matter, rather than gut-wrenching fear of missing out on high CAO points, is in my view a positive development.