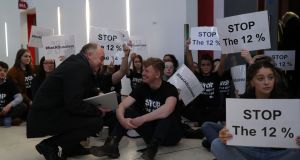 University College Dublin (UCD) students held a sit-down protest outside a meeting of the university’s governing authority, in protest over proposals to increase on-campus accommodation rents by 12 per cent over the next three years.

Students protested at the entrance to the meeting on Thursday morning holding placards with the slogans “Stop the 12%” and “#NotaBusiness”.

UCD President Prof Andrew Deeks stopped briefly to speak to UCD students’ union officials, before making his way through the protesting students into the meeting.

The decision to increase campus accommodation rent by four per cent each year for the next three years, the maximum permitted under rent cap laws, was made in recent weeks by the university management team.

The decision will be discussed at the Thursday governing authority meeting, which is the effective board of the university.

Earlier this week the students’ union held a rally on the south Dublin campus over the rent increases, and union president Joanna Siewierska delivered a petition to Prof Deeks opposing the decision.

The increase would mean the cost of student accommodation on the Belfield campus rises to between €8,000 and €9,900 per year over the next three years.

In a previous statement, UCD has said the rent hikes were required to pay for the maintenance of current accommodation, as well as help fund plans to build 3,000 extra student beds on campus.

Under legislation aimed at tackling rising rents, annual increases are capped at four per cent per year in rent pressure zones, such as Dublin and other cities. These rent caps were extended to cover purpose-built student housing last year.

Since then several universities, such as UCD, NUI Galway and Dublin City University, have signalled they intend to increase campus rents by the maximum four per cent rate for the next academic year. University College Cork also recently announced it would raise student rents by three per cent.

Ahead of the meeting on Thursday, Prof Deeks briefly stopped to speak to Conor Anderson (31), the students’ union graduate officer, who was among the crowd of protesting students.

“He said ‘we may disagree on the best course forward, but we’re happy to have that discussion inside’, and I said, yes sounds good,” Mr Anderson said.

“They think that the students are not serious, they believe that myself and my colleagues as sabbatical officers are only here for a year and they can wait us out … it really just illustrates, the word condescending just keeps coming to mind,” he said.