School buildings and the election: ‘Our children are the future’ 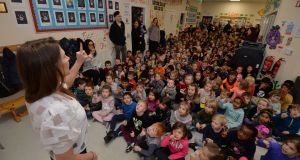 Caitríona Ní Cheallaigh, principal at Pelletstown Educate Together National School, addresses pupils in a corridor which doubles up as a PE space when the weather is wet. Photograph: Alan Betson/The Irish Times

Mary Healy, a mother of two, says it was “one of the happiest days of my life” when she heard a new primary school would be built close to her home.

That was five years ago, and today there is still no sign of a permanent building for the school.

Pelletstown Educate Together National School operates out of what used to be the “marketing suite” for an apartment complex, which has been leased from a property developer.

Parents, pupils and teachers still don’t know if the school will have to move to another temporary location near Ashtown in Dublin this summer.

“This area has grown very fast, but the infrastructure for education isn’t here. It’s been a case of ‘build, build, build’, but there’s a real lack of thought when it comes to schools. It’s an afterthought. So, we still don’t have a primary school. And there’s no provision for a secondary school . . . It’s a source of huge uncertainty.”

Healy’s experience is replicated in many other fast-growing communities around the country. While housing and health have dominated the election campaign, at a local level, education is emerging as a key political issue, especially in the commuter belt.

Staff, pupils and parents at dozens of schools have been hanging on for years for proper buildings. In frustration, many are now taking part in protests in the run-up to polling day in an attempt to make an impression on candidates.

The latest figures indicate that more than 300 schools nationally are waiting for new buildings. Hundreds more require extensions or refurbishment.

All this comes at a time when a demographic bulge is working its way through and heaping pressure on an over-stretched education system.

The Department of Education says record levels of funding have been going towards school buildings, with €620 million allocated for this year.

It estimates that construction on about 60 large-scale school building projects will begin this year, delivering more than 30,000 places for pupils.

However, Educate Together, the school patron body, says too many new schools are obliged to work in buildings that are unsuitable, in locations that are often outside their catchment areas. For example, of the 12 schools it opened last year, all were in temporary buildings.

“Educate Together is calling on all candidates and parties to commit to supporting legislation that all new housing estates must have schools ready for the families who move in and to ensure that any new school in their constituency opens on time and in modern, safe facilities,” Educate Together said.

In Bray, Co Wicklow, years of delays in securing a permanent home for North Wicklow Educate Together Secondary School has become a hotly debated topic. In 2016 the department announced the school’s new home would be on a gleaming new campus co-located with Bray Institute of Further Education.

Four years on, the school is still on a temporary site that has no play area or sports hall – even though PE is core part of the curriculum.

Jonathan Browner, the school’s principal, says the school is still waiting for a clear sign as to when it will have a permanent home. The uncertainty is particularly tough on its students with autism spectrum disorder, who thrive on routine.

In the meantime, the school is due to leave its current temporary building this summer and move to yet another non-permanent premises in the town.

Over at Stepaside Secondary School in south Co Dublin, students and staff find themselves in a similar situation. The school was established four years ago in prefabs located in the local rugby club’s car park.

Its current temporary home is in spare classrooms at the local primary school. It is due to outgrow this shortly and move to another set of prefabs this summer.

School officials are worried that it will have to “massively” reduce its planned student numbers if it does not move to a permanent home soon. During the election, students, teachers, parents and local politicians have been marching to the site where its permanent home is meant to be to highlight their concerns over the delay.

At Coláiste Chraobh Abhann in Kilcoole, Co Wicklow, parents say long delays in expanding the school mean almost 60 children are without a secondary school place for the coming school year.

While it was built for 580 pupils, it accommodates 800. The additional 220 students are educated in single-storey prefabs; it says double-storey structures are needed urgently to expand the capacity to a 1,000-pupil school.

There is no school assembly, says the principal, Caitríona Ní Cheallaigh, because there is nowhere to fit the pupils.

Some classes for special needs pupils take place in corridors . There is no gym either, so sport and PE are off the agenda when it rains.

In the meantime, the school has been told to vacate its current temporary home on June 26th.

“We have no clarity on where it will be located,” says Ní Cheallaigh.

The school is carrying out a “build-watch” awareness walk, where staff and pupils walk from the school’s current site to the two possible locations where it could be in September.

“It always seems to be far down the list of priorities – but it shouldn’t be,” says Healy. “Our children are the future. They need to be valued, and need to feel that way. That’s why it’s a big voting issue here.”