Empathy in education: ‘It’s just as important as learning maths’ 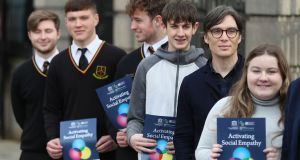 On top of adolescence and a pressure-cooker points race, social media is throwing up a whole new set of obstacles.

“It’s a very complex time to be growing up. Things are changing at a very accelerated rate,” he says.

“We’re all aware of the role of the internet and life online . . . it seems that a lot live their lives inside this device – and it’s something we can never understand, not being natives.”

It’s one reason why Murphy has opted to get involved in a new project being developed by Prof Pat Dolan, director of the Unesco Child and Family Research Centre at NUI Galway, on promoting empathy among schoolchildren.

It is “as important as learning maths”, yet for too long it has been neglected by the education system, Dolan argues.

Social media is contributing to a lack of connectedness which means people can be more likely to say or do things without thinking of its impact on others, he says.

In response to this problem, researchers at NUI Galway have developed “activating social empathy”, a programme designed to teach empathy skills in the junior cycle.

Following a two-year pilot project, the programme is now being rolled out to 2,000 students in 25 schools.

The plan is to make the full programme available as a free resource to schools in Ireland from September 2020.

Dolan says the feedback has been very encouraging, with students and teachers typically reporting that the programme had a positive impact on students’ empathy and personal development.

“We need to get really serious about empathy in schools and education. Young people deserve it,” he says.

“If all we do is make the world a better place for young people to go to school, and not feel they are intimidated or left out or different, what we’re talking about will be well worthwhile.”

One secondary school which has tested the programme is CBC Monkstown Park in Co Dublin.

Hugh Fitzmaurice, an English and history teacher, says the programme was hugely well-received in the all-boys school for giving students a chance to discuss their feelings.

“It gets people thinking beyond themselves in an age where we’re so self-absorbed,” he says.

“You go on the Dart, everyone’s on their phone, they don’t even look at each other . . . I think to take time to look each other in the eye and see how the other person is feeling – and for fellas to do that in school – is a privilege and an honour.”

Leaving Cert student Nathan de Buston says the programme had a noticeable difference on his classmates.

“We got to share opinions on how to treat others,” he says. “Outside class, I saw the biggest difference – the rapport in the locker-room was that bit more warm, or going home and thinking, ‘Maybe tonight I won’t slam the door and go off in a tantrum!’”

As far as Cillian Murphy is concerned, he hopes it will, in time, become part of the curriculum for all young people.

“You can’t really be an actor without employing empathy as a very important tool in your arsenal. In supporting this education programme which we are launching today, my hope is that it will help young people see that everyone has a different story and everyone’s story is valuable.”