Teachers’ strike: ‘We have to work part-time jobs to get by’ 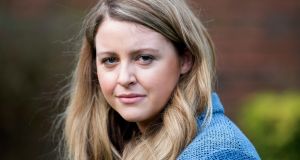 Tara Ní Mhóráin, who is on the new entrants pay scale, is one of thousands of teachers set to strike on Tuesday. Photograph: Dave Meehan

Tara Ní Mhóráin (29), a secondary school teacher, works a part-time job in order to make ends meet. So, too, do the two other teachers she shares a house with in Co Louth.

All are on lower pay scales which were introduced in 2011 to cut public spending.

“It’s something which is completely foreign for older teachers,” Ní Mhóráin says. “I do some part-time lecturing work in Dublin City University. My other teaching friends work in shops, babysitting or administration during the evenings or weekends. And we all work during the summer. We have to,” she says.

“At my school, most teachers are on the lower scale. You see some older colleagues who might be able to buy a new car or go somewhere nice on holidays . . . that feels so out of reach for many of us, even though we’re in the classroom next door doing the same job. It’s a bitter pill to swallow,” she says.

Even though she’s classified as a “new entrant teacher”, many have been teaching close to a decade now.

“We have waited long enough for it to end . . . many of us have had to put life decisions off, such as having children, getting married. Ending two-tier pay has been a waiting game and it’s driving people from teaching,” she says.

Ní Mhóráin says she loves her job and does not want to be on strike on Tuesday. But, she says, it is vitally important that the next government ends pay inequality swiftly. Otherwise, teachers may consider leaving the profession.

“It makes you wonder do you want to teach for the rest of your life. I used to work as a translator with the European Commission. It wasn’t work I enjoyed as much, but it has more financial benefits.”

While the political parties have all pledged to end pay inequality, Ní Mhóráin says many of the promises are “wishy washy”.

“We want an end date. We want to know when can we get on with the rest of our lives,” she says.