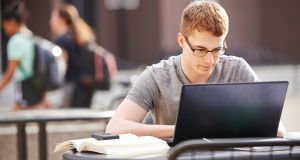 I am sitting the Leaving in June and have listed Bess (business, economics and social studies) in Trinity as my first choice. A friend tells me there is a Trinity matriculation exam which can be used for CAO admissions purposes. Could I use this option to improve my chances of securing the points to get into my course?

You’re correct. Not many are aware that a matriculation exam in, graded in equivalent terms to grades used in higher level Leaving Cert exam papers, is held in Trinity every year, usually in April. Just two exams are available: biblical studies and geology. You may take one or both subjects and each exam is three hours long. And, yes, applicants may combine results from the Leaving Cert and the Trinity matriculation examination of the same year for the purposes of CAO entry points.

The closing date for application is March 1st. Application forms and a syllabus can be obtained online or from the academic registry at Trinity College Dublin (email: academic.registry@tcd.ie). An application fee of €98 is payable by all matriculation exam applicants.

It is up to you to decide if it is worth studying or whether there is crossover with subjects you are already studying.

Past papers and suggested reading is available online (www.tcd.ie/Religions_Theology).

To give you a flavour of what to expect, the biblical studies syllabus comprises two sections.

The first section focuses on the Old Testament. Students may focus on one of two areas. The first is the history of Israel up to and including the Babylonian exile. Particular attention is given to the origins of Israel, the rise of the monarchy, the fall of Samaria and the impact of the exile.

The second area is Old Testament literature including the Joseph story (Genesis 37-48), poetry (the Book of Amos) and wisdom (the Book of Job).

The second section of the syllabus is based on the New Testament. Similarly, students may focus on one of two areas.

The first is the history of early Christianity in the first century, with particular attention given to the Jewish and Hellenistic environment, Jesus and his movement in Palestine and developments up to the destruction of the temple in 70AD.

The second area is early Christian literature including the Acts of the Apostles, Mark’s Gospel and Letters: First Corinthians.

Students can also register for the Trinity matriculation exam in geology. The paper will offer a choice of about 10 questions from which five must be answered.

The syllabus includes six key areas. They include general geology (theory of plate tectonics and its bearing on the origin of earthquakes, volcanoes, mountain belts, and rift valleys); surface processes (such as weathering and its dependence on climate and rock type); earth materials (minerals, and the diagnostic features sufficient to distinguish between them); geometry of rock bodies (folds and faults); earth history (such as the principles of radiometric dating of minerals); and ancient life (including the origin, evolution and extinction of organisms).