Poorer schools should have priority for sports grants – report

Review of funding follows controversy over €150,000 grant to Wesley College 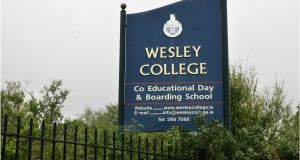 Minister for Sport Shane Ross was criticised for his reaction to a grant awarded to private school Wesley College in his Dublin Rathdown constituency. File photograph: Dara Mac Dónaill

A review of the State’s sports capital grants programme has found that schools in disadvantaged areas should be given a higher priority in future funding rounds, amid confusion in the Department of Sport about whether private schools were eligible for public funding.

The review follows a controversy over a grant of €150,000 to a private Dublin school, Wesley College, under the scheme, a move that Minister for Sport Shane Ross, in whose constituency the school is located, said he was “delighted to confirm”.

Mr Ross later said that he had no part in the decision.

Now a review of the scheme has found that while private schools should not be excluded entirely from the scheme, a revised system should give greater priority to schools in poorer areas.

The review also says that applications from two other private schools, which were initially rejected, were accepted by the department on appeal.

The other schools were Loreto High School, Beaufort, in Rathfarnham, which received €150,000 for its hockey pitch (which it shares with Loreto Hockey Club), and Rathdown School in Glenageary in south Co Dublin, which received €19,000 for hockey equipment.

Loreto Beaufort is adjacent to, but not in, Mr Ross’s Dublin-Rathdown constituency.

The review describes considerable confusion in the Department of Sport over the eligibility of private schools for the grants scheme, which disburses millions of euro each year for sports facilities.

Some officials believed that private schools were not permitted to receive grants under the scheme, but other officials had a different view.

While an application from one private school was deemed invalid by officials in an initial consideration of the applications, it was later discovered that applications from two other fee-paying schools had been initially approved. When this was discovered, the applications of all three were refused on the grounds that they were invalid.

However, when all three appealed – and at least two of the schools threatened legal action – the department had a rethink and decided that fee-paying schools were not in fact prohibited from participation in the scheme. Officials discovered that one of the schools had previously received a grant under the scheme. All three schools were subsequently approved for grants.

According to the review, “the department’s own guide to making an application for the 2017 round of the Sports Capital Plan contains no reference to excluding private schools . . . It is now clear that the section of the department’s guide to making applications dealing with ‘private/commercial’ organisations needs to be amended to avoid any future ambiguity . . . While private schools should remain eligible to apply, it is suggested, however, that future funding of schools projects should include a greater weighting towards schools in disadvantaged areas.”

The Sports Capital Programme is the principal source of Government funding to sports facilities. The programme has operated from 1998 but was suspended in 2008 due to the financial crisis. It subsequently resumed in 2012 and there have been rounds in 2014, 2015 and 2017.

More than 10,000 projects have benefited from sports capital funding since 1998, bringing the total allocations in that time to approximately €1 billion, the department says.