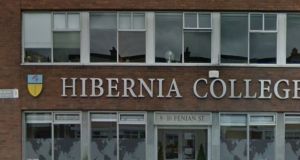 Hibernia said the approach was not a replacement for teachers, but had potential to ease difficulties facing students and school principals. Photograph: Google Street View

Some secondary schools are live-streaming video of classes to their pupils because of a shortage of qualified teachers in key subjects, an Oireachtas committee has heard.

Hibernia College, one of the biggest providers of teacher education, says it is involved in pilot projects where classes are taught remotely by qualified teachers in real time over the internet.

This was in response to difficulties being reported by some secondary schools in hiring qualified substitute teachers across subjects such as maths, science and languages.

Dr Seán Rowland of Hibernia said the approach was not a replacement for teachers, but had potential to ease difficulties facing students and school principals.

“So, we get a good teacher of maths in Cork, she’s fully qualified and we live stream her to a classroom in Galway to teach maths,” he said. “You have to make sure it’s quality, that the class is productive, that there is discipline and that it is supervised and fulfils the requirement of the Teaching Council. everything has to apply except the teacher is on the other side of the camera.”

Dr Rowland was speaking at a meeting of the Oireachtas committee on education on Tuesday, which examined the impact of teacher shortages in some subject areas.

However, proposals to extend the practice of remote teaching to ease the teacher supply “crisis” drew sharp criticism from a teachers’ union and some TDs .

Joanne Irwin of the Teachers’ Union of Ireland said while the approach might work among “highly motivated students in south Dublin”, many schools were trying to ensure students arrived in school in the first place.

Sinn Féin TD Kathleen Funchion said such a move was “completely unacceptable” and that difficulties hiring teachers in some subjects was down to two-tier pay scales across the profession.

However, Independent Senator Lynn Ruane  said the proposal had merit in cases where no qualified teachers were available for students.

She said her own daughter did not have access to an Irish teacher for three months and live streaming was better than having no teacher at all.

Dr Rowland asked that members have an open mind and to see the pilot projects in action before dismissing them outright.

Dean of DCU’s institute of education Dr Anne Looney said that having a qualified teacher in the classroom  was “by far and away” the best solution. But she said there was merit to schools collaborating and partnering to sharing teaching resources. Some schools, she said, shared teachers in subjects such as physics.

The Joint Managerial Body (JMB), the largest secondary school management body, said it was grateful that teacher shortages were being addressed in a “serious manner” and had been accepted as a “genuine threat to the education of our young people”. However, Fr Paul Connell of the JMB said a number of other steps are needed to tackle the issue.

He said pay rates for retired teachers needed to be improved, while a five-day limit on the use of unregistered teachers was a “disincentive” to potential substitute staff.

Student teachers in the second year of their post-graduate qualification should also be awarded conditional registration status and allowed to take classes on a paid basis.