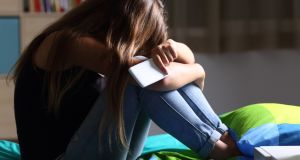 The proportion of students who felt upset or threatened due to social media or internet postings was highest in the girls’ school. File photograph: Getty Images

Students who are bullied at school are mostly taunted about their weight or appearance, according to a new study.

Teachers say a growing focus on body image – particularly on social media – is likely to be a factor behind hurtful names being used over fellow students’ physical appearance.

The study is based on responses from more than 400 students in three secondary schools in the Dublin areas, including an all-girls Catholic school, an all-boys Catholic school and a co-educational community college.

The study was carried out by researchers from DCU’s national anti-bullying research and resource centre .

Dr Debbie Ging, the report’s author, said she was struck by the extent of bullying linked to body image.

“Other indicators such as ethnicity and sexuality were still very significant factors in bullying behaviour but the prevalence of body size-based bullying surprised us, in both the boys’ and the girls’ schools.”

The type and prevalence of bullying varied significantly across the different school types.

Reasons for feeling safe were attributed to having good friends, followed by supportive teachers and bullying not being tolerated

For example, the proportion of students who felt upset or threatened due to social media or internet postings was highest in the girls’ school (21 per cent), followed by the boys’ school (14 per cent) and mixed school (8 per cent).

Also, more students had felt excluded or “left out” on purpose by other students at the girls’ school (47 per cent), followed by the boys’ school (28 per cent) and the mixed school (22 per cent).

Physical harassment was considerably more prevalent in the boys school and least frequent in the all-girls’ school.

Students in the mixed community school expressed the highest level of belonging (81 per cent ), followed by the boys’ school (64 per cent) girls’ school (58 per cent).

Reasons for feeling safe were attributed to having good friends, followed by supportive teachers and bullying not being tolerated.

In relation to promoting an atmosphere of inclusivity for LGBT students, the research found only a small number in the all-boys’ school (8 per cent) felt their school was “very accepting” of LGBT people, compared with the 19 per cent in the all-girls’ school and 39 per cent in the mixed school.

Dr Ging said the result highlighted the need for “ongoing self-assessment instruments” to improve the equality and inclusion climate.

However, researchers cautioned that, given the sample size, it did not necessarily follow that these findings were representative of these types of schools.

The report notes that the girls’ school was in an affluent Dublin suburb, the boy’s school was in a “socially mixed” suburban village, while the community college in a relatively affluent suburb.

Feedback from teachers and principals indicated that schools needed broader instruments to evaluate the diversity climate taking into account a range of issues such as gender, sexuality, ethnicity, class, body image and religion.