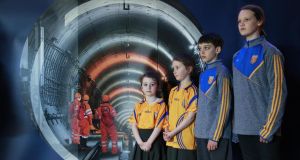 Representatives of two Irish medium schools come before an Oireachtas committee hearing this afternoon to outline their concerns about the impact the development of Dublin’s new MetroLink could have on the health and safety of their students.

Representatives from Scoil Chaitríona and Scoil Mobhí are strongly opposed to plans for the requisition of lands currently used by the schools, Na Fianna GAA club and Home Farm soccer club, as part of the €3 billion MetroLink project.

School representatives are expected to raise concerns with the committee over the impact this phase of the proposed Dublin north-south rail service will have on the Irish language community in the Glasnevin area.

The plans, published last month, include a proposal to requisition Na Fianna’s front pitch and the club’s two all-weather pitches, Home Farm’s soccer pitch, and the driveway into Scoil Mobhí in order to establish a major infrastructural construction site and an underground train station on Mobhí Road.

MetroLink is a central element of the Government’s new infrastructure programme and the route is to run between Swords and Sandyford along a 26 Km route, with a large proportion due to be built underground.

Proposals include a plan to build a tunnel boring machine launch site, support works and a train station on the grounds currently used by the two schools and both sports clubs.

“We have major health concerns, due to the likelihood of dust, diesel emissions, noise and vibrations - and those same factors will make effective education impossible throughout the construction” , Ms Nic Niallaigh said.

The proposed site incorporates lands used by an Irish medium naíonra (nursery), bunscoil (primary), and meánscoil (secondary school) and concerns have been voiced about the impact the works will have on the Irish language community in the area.

“This community is at risk. It will be torn apart by this. That such a proposal should have been brought forward, in Bliain na Gaeilge and at the same time as the Irish language is being placed front and centre of Project Ireland 2040, is an irony that is truly heart breaking”, Ms Nic Niallaigh said.

Plans for the new MetroLink were met with widespread opposition in the area when the Transport Infrastructure Ireland (TII) and the National Transport Authority (NTA) published its preferred route last month. Over 1,000 people subsequently attended a public consultation meeting in Dublin City University to discuss plans with representatives of TII and the NTA.

Ahead of Wednesday’s committee hearing, Transport Committee chairman Fergus O’Dowd acknowledged that “concerns have been raised” about the impact of the construction.

“It is estimated that the project will take six years to complete and there is some disquiet in the community about the effect this may have in terms of noise, pollution, traffic and the loss of amenities and sports grounds”, he said.

He said today’s hearing “will examine the issue in greater detail with the National Transport Authority and Transport Infrastructure Ireland, while we will also get the perspectives of local residents and representatives from schools and sports organisations in the area.”