Lecturers to take action over ‘unsustainable’ burden of work 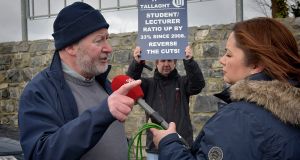 TUI general secretary John MacGabhann at a recent protest by lecturers who have voted by a margin of 96% to 4% to embark on a campaign of industrial action. Photograph: Tommy Clancy

Lecturers in institutes of technology have voted in large numbers to begin a campaign of industrial action over “unsustainable” workloads.

From next September, lecturers who are members of the Teachers’ Union of Ireland say they will cease working an additional hour a week, on top of their weekly norm.

Union sources argue that ceasing to work these extra hours will not amount to a “repudiation” of the current public sector pay deal on the basis that an agreement to review these hours has been “breached”.

Any repudiation of the pay deal by a trade union risks triggering pay freezes and potential losses.

TUI members have voted by a margin of 96 per cent to 4 per cent to embark on a campaign of industrial cation.

Two so-called “flex hours” were introduced for lecturers under the Croke Park and subsequent national agreements .

Under a deal struck in 2016 between the TUI and the Department of Education, one of these two “flex” hours was redesignated to duties within contract other than teaching or lecturing

The TUI says the same agreement committed to a review by March 2017 that should have redesignated the second flex hour. But it says this deadline was not adhered to.

The union maintains that delivery of this additional lecturing hour, as well as giving rise to unsustainable workload, has also significantly impaired services to students.

TUI president Joanne Irwin said the institute of technology sector had suffered severe cuts to funding which has affected the lecturers’ working conditions and educational experience of students.

She said hours – 16 for lecturers and 18 for assistant lecturers – have “long been far above international norms”.

“Moreover, each hour of lecturing [requires] a multiple of hours for the associated preparation, reflection, assessment and feedback,” she said. “To make matters worse, under successive national agreements, lecturers were required to flex up by two lecturing hours above these already excessive norms.”

Ms Irwin said that while one of these hours was redesignated to other contractual duties under a 2016 deal, a review of the usage of the second hour for duties other than teaching was to be completed by March 2017.

“Over two years on, despite the consistent availability of TUI, this review has not been completed and redesignation of the second flex hour has not taken effect,” she said.

“ In this ballot, members have made clear their strong feelings on this issue. The key element of the resulting industrial action is that members will deliver no more than standard lecturing hours, 16 or 18, from the commencement of the next academic year,” she said.

In addition to what she said was an unsustainable workload, lecturers who entered the profession after January 1st, 2011, continue to suffer “pay discrimination” due to austerity-era salary cuts.