Ictu finds TUI did not act in line with rules in accepting 1,070 teachers as new members 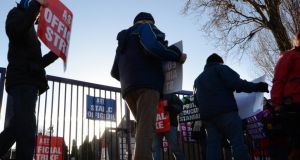 Members of the TUI and the ASTI on picket in 2014. Photograph: Cyril Byrne

Over 1,000 second-level teachers who left the Association of Secondary Teachers Ireland (ASTI) to join the Teachers’ Union of Ireland (TUI) during its dispute with the Government last year may have to go back to their former trade union.

This follows an investigation into all allegations by the ASTI that its members were poached by the TUI during an industrial dispute last year. Under industrial relations rules, rival unions are not permitted to hire members from each other during a dispute.

The Irish Times understands that a disputes committee established by the Irish Congress of Trade Unions (Ictu) – the umbrella body for the trade union movement in Ireland – has effectively backed complaints made by the ASTI.

Members of the ASTI lost thousands of euro in frozen pay and forfeited payments last year after the union was considered to have “repudiated” the Lansdowne Road pay deal in place at the time.

The TUI, however, remained inside the pay deal and its members were unaffected by these financial penalties.

This presented a financial incentive for members of the ASTI to join the TUI.

It is understood that the disputes committee established by Ictu found that the TUI had not acted in line with its rules and constitution in accepting just under 1,070 teachers – who had previously been in the ASTI – into its membership.

It is understood that, effectively, the TUI has been asked by Ictu to tell the teachers concerned that they should reapply to join the ASTI.

Ictu rules allow the TUI to appeal against the findings of the disputes committee.

A spokesman for the TUI declined to comment, beyond stating that it was “engaged in a process” with Ictu. “That process is not yet complete and it would therefore be inappropriate to comment further at this time,” the spokesman said. There has been alarm within the ASTI over the loss of some members linked to last year’s campaign of industrial action, which resulted in losses for thousands of its members.

While some may have left for financial reasons, others say they left in protest over the union’s stance.

During this period, the TUI saw its membership grow.

The ASTI’s membership of serving teachers is now at the lowest level in more than 20 years.

While former ASTI members who joined the TUI during the dispute face being asked to reapply to their old union, there is no way of compelling them to do so.