Education is being run ‘in a lean management manner’, says secretary of CPSMA 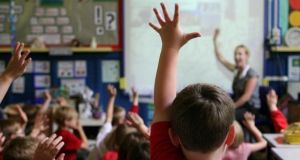 Funding cuts have meant more spending for parents of schoolchildren, according to the CPSMA. Photograph: Getty Images

Parents of Irish schoolchildren have had to spend €46 million to make up for shortfalls following funding cuts, the Catholic Primary Schools Managers’ Association (CPSMA) has said.

Schools have lost about €110 million since cuts were made to the capitation grant, according to the association’s general secretary, Seamus Mulconry. The grant is allocated to primary and voluntary secondary schools, based on the number of recognised enrolled pupils.

Mr Mulconry said the current capitation grant covers just 52 per cent of the overall cost of running a school. The CPSMA is calling for capitation to be restored immediately to its pre-cut level of €200 annually per child.

Education is being run “in a lean management manner,” said Mr Mulconry. He said “we’re going from lean to anorexic. We need more investment by Government.”

Speaking on RTÉ’s Morning Ireland programme, he called for more investment, not more circulars, from the the Department of Education and its Minister Richard Bruton.

On the same programme Áine Lynch of the National Parents’ Council said there has been pressure on parents for years. The annual letter seeking “voluntary contributions” does not feel “voluntary” she said.

Parents want to have a relationship with their children’s school based on education not finance, she said.

Voluntary contributions are being used to assist in the running of schools and not for extras or “niceties”. There are also further costs such as photocopying money and contributions for arts materials, she said.

Mr Mulconry warned that the current system grants payments needs to be changed, as it leaves schools “running on fumes” at certain times of the year. Sometimes, he said, “money is moving around school accounts” as principals try to make up for the lack of cash flow.

He described voluntary contributions as a “stealth tax on kids” for a service that is supposed to be free. Mr Mulconry said there has been a 15 per cent cut in capitation funding since 2010.

Mr Bruton said increasing the capitation grant is one of a number of issues that will be weighed up in the next Budget.

He said he would like to see a situation where education is 100 per cent funded by the State, but that there has always been a tradition of local contributions.

The Minister told RTÉ’s Today with Sean O’Rourke show he recognised that 10 difficult years had caused damage to the education system. He warned that there also needs to be recognition of “the vulnerabilities of economic recovery” and of “the huge demands out there.”

Mr Bruton said education had received an extra 1 billion euro in recent years, 85 per cent of which had gone to schools in the form of extra teachers and special needs assistants, reduced pupil-to-teacher ratios and the provision of extra special needs classes.

Putting more teachers in place had been a priority, as the core of the system had to operate properly, he said.

When asked about the position of schools and boards of management in relation to parents wearing pro or anti-repeal garments outside schools and teachers expressing opinions on social media, the Minister said there were no guidelines, but he was certain that schools would be careful not to bring divisive issues into schools.