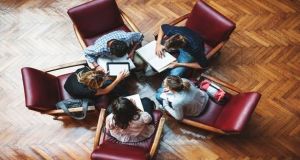 Many private schools in Ireland struggled over the past decade with enrolment due to a combination of austerity measures, a sluggish economy and changing education trends.

But things now appear to be looking up: the economy is motoring, there is more money in families’ pockets and a new and unexpected source of pupils has emerged: continental European students.

Many Irish boarding schools report a rise in interest from Spanish and German families as the UK prepares to leave the EU.

Mark Boobbyer, principal of St Columba’s in Dublin, has seen the growth in interest first-hand.

“When I first started teaching in boarding schools 25 years ago, the overseas children applying were mainly Chinese, Korean, possibly Nigerian,” he says.

“Now, while there are still plenty of them, there is far more interest from Europe – we have a lot of interest from Germany, from Spain. ”

At Midleton College in Cork, principal Edward Gash also sees how Brexit is having an impact.

“More people are looking at going to boarding school here because of the Brexit uncertainty... I think they’re looking at Ireland as an alternative, should Brexit make things difficult in a UK context,” he says.

“There has been an increase in the number of international students from Spain and Germany and so on, and they are coming slightly younger than they used to.

“Many international students are coming just for a year to improve their English,” he says.

A key attraction for overseas students and their families is that Ireland will be the largest English-speaking EU member state from next year, assuming Brexit goes ahead as planned.

Another is that tuition fees are just a fraction of what they are in the UK because of the way private schools here are subsidised by the State.

Salaries of most teachers in fee-paying school are paid for out of the public purse at a cost estimated to be in the region of €90 million.

In the UK, by contrast, teachers’ salaries in private schools are typically paid for out of pupils’ tuition fees.

According to an Irish Times survey, the most expensive boarding school this year is St Columba’s in Whitechurch, Dublin, which charges up to €22,800.

Boobbyer says it is highly likely that Britons with Irish connections may also opt to send their children to Irish boarding schools, rather than similar British institutions.

“An awful lot of people in the UK have connections in Ireland, and although we are relatively expensive in the Irish context we are still less than half the price of a big boarding school in England, ” he says.

“Everyone is still in very unknown territory with Brexit but we’re thinking maybe this will lead to an increase in British people moving out, and searching for boarding schools outside of the UK.”

Enrolment levels in private schools generally is on the rise, meanwhile, as family incomes return to boom-time levels.

Most have also increased their fees by anywhere between 1 and 10 per cent over the past year.

Presentation College Cork has had the largest year-on-year increase in fees, with charges rising from €3,500 last year to €3,900 this year, a 10 per cent jump.

The next highest increases were at Villiers Secondary School in Limerick (€6,370), Newbridge College (€4,400) and Royal School Cavan (€2,800), whose feels all increased by between 6 and 7 per cent.

Loreto on St Stephen’s Green was the only institution to see a drop in fees, which fell 2 per cent, from €4,427 last year, to €4,340 for the current academic year.

A new arrival on the private school landscape is Nord Anglia International School Dublin, which is the country’s most expensive school, charging fees of up to €24,000 a year.

It is aimed at the children of mobile executives and teaches children the International Baccalaureate (IB) rather than the State curriculum.

The qualification is recognised world-wide and culminates in a two-year diploma, equivalent to the Leaving Cert.

The school is operated by a Hong Kong-based firm which runs international schools across the globe, and backed by businessman Barry O’Callaghan’s firm Rise Global.

It has spent millions of euro converting what used to be Microsoft’s old headquarters into a school with specialist arts and Stem (science, technology, engineering, art and maths) facilities.

The school says most of those enrolled so far are from families who are “seasoned internationalists” and are familiar with the IB.

Smaller numbers are from local families who want to give their children a different educational experience.

It’s difficult to say how popular the school is so far. Nord Anglia has not commented on how many children are enrolled.

However, given average class sizes of about 10 children so far and the fact that it employs about 30 teachers, it is likely to have in excess of 100 students to date.

For Irish parents thinking about sending their children, however, there are still major barriers.

Nord Anglia’s fees are about three times more expensive than day-pupil fees charged by even the most expensive Dublin private school.

Another obstacle is that the Leaving Cert is regarded as more generous in attracting CAO points. That is because some key sections of the IB are not formally recognised by Irish universities.