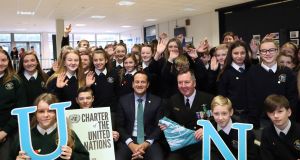 Taoiseach Leo Varadkar and Vice Admiral Mark Mellett, Chief of Staff of the Defence Forces with students from Ringsend College at the launch of the Global Schools programme. Photograph: Julien Behal

Irish diplomats and peacekeepers are to visit every secondary school in the State over the coming months as part of ambitious plans to double Ireland’s impact in the world.

Under the Global Schools programme, more than 700 schools will be presented with a UN flag and a copy of the preamble of the UN Charter.

Diplomats and peacekeepers will to talk to students on the work they do overseas to help build a greater understanding of how UN membership has played a significant role in Ireland’s history.

Taoiseach Leo Varadkar, who launched the programme at Ringsend College in Dublin on Friday, said it formed part of the Global Ireland initiative which involves expanding our presence internationally and increasing development assistance for some of the world’s poorest countries.

“It is my hope that the Global Schools programme can inspire Ireland’s next generation of ambassadors, peacekeepers, aid workers and diplomats,” he said.

“Today’s secondary school students are the next generation of world leaders and I think it’s really important that they learn about our work overseas, as well as Ireland’s place in the world.”

He said Ireland has a huge impact internationally through our diplomats, peacekeepers, our culture and our agencies.

“We trade with countries around the globe, members of our Defence Forces help keep people safe in some of the world’s most war-torn regions and through more than 80 embassies and consulates we represent Ireland overseas and help Irish people, no matter where they are on the planet,” he said.

“Through our ambitious Global Ireland programme, the Government is committed to doubling our footprint overseas.”

The Government is also lobbying to secure a non-permanent seat on the UN’s Security Council for the 2021-2022 term.

Mr Varadkar faced questions from a number of transition year students, ranging from whether it was important to give money to overseas countries to why the UN was important for a country of Ireland’s size.

In response, the Taoiseach said no nation can hope to meet the challenges facing the globe on its own or without co-operating with other countries.

He also said he did not see Ireland’s overseas aid budget as “giving money” away to overseas countries.

Rather, he saw it as an investment in promoting stability, peace and, potentially, trade with developing countries.

Vice Admiral Mark Mellett, Chief of Staff of the Defence Forces said Ireland has a proud history of UN service.

“Global Schools is a valuable initiative in helping build understanding with our young people about Ireland’s international role, and our ambition to double Ireland’s impact around the world through the Global Ireland programme,” he said.

Officials say the Global Ireland programme represents the most “ambitious renewal and expansion” of Ireland’s international presence ever undertaken .

It will involve the opening of a series of new embassies and integrating diplomatic, cultural, business, tourism and trade services into single operations.

Ireland House in Tokyo - where trade, arts and culture are housed in a single facility - is seen as a model for future development.