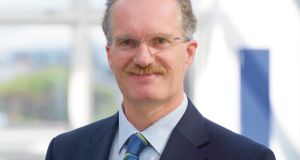 A senior UCD academic has been appointed president of the Technological University Dublin.

The new institution - due to be formally established in January from the merger of Dublin Institute of Technology, IT Tallaght and IT Blanchardstown - will be the country’s biggest third level institution with 28,000 students.

He is also provost of the Beijing-Dublin International College, a joint venture between UCD and Beijing University of Technology.

Prof FitzPatrick’s term of office will take effect on 1 January 2019 when Technological University Dublin is formally established by law.

In a statement, Minister for Education Joe McHugh said Prof FitzPatrick will bring a wealth of knowledge, skill and experience to the new institution.

“With a background in engineering and leadership I am sure that he will drive the Government’s ambitious approach to third level education and set the benchmark for other technological universities to follow,” he said.

TU Dublin will become the largest third level institution in the State with almost 28,000 students and over 3,000 staff.

Prof Fitzpatrick is likely to face a daunting challenge in fulffilling the combined potential of the three separate institutions.

Staff across all three colleges, for example, have been guaranteed that they will not be reassigned to another of the merging institutions, which limits the potential for change.

Most institutions have also said their course offerings will not be rationalised.

The move to create technological universities in Ireland follows a trend across Europe to create larger third levels institutions with greater scale, strength and expertise.

Critics, however, say the move amounts to little more than a name-plate change and claim the criteria required to secure technological university status have been “dumbed down”.

A number of other institutes of technology form part of three other separate groups in Munster, Connacht-Ulster and the southeast who are bidding to also become technological universities.

Their cases will be examined by an international panel selected by the Higher Education Authority.

The Munster bid – which includes Cork Institute of Technology and IT Tralee – is widely expected to be second in line to secure the status and would have a total of 14,000 students.