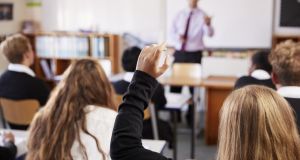 A public consultation on Government policy on exemptions from the study of Irish in primary and secondary schools has been heavily criticised by advocacy group Conradh na Gaeilge.

Niall Comer, president of Conradh na Gaeilge said the organisation was of the view that the outcome “is already decided” and that the process to gauge public opinion “is not a reasonable attempt” to discuss the issue or to reach agreement on a “new fairer system”.

Mr Comer said an online survey announced by the Department of Education on December 7th is being conducted “at the worst time of the year” as it clashes with the Christmas break when interested parties such as teachers, school principals, students and parents are likely to be busy.

Survey participants are asked to share their views about proposed changes to primary and post-primary circulars that guide school authorities when they consider applications for exemption from the study of Irish.

However, Conradh na Gaeilge says a 120-word limit on admissible responses and the omission of some of the Department of Education’s own Inspectorate’s research where the benefits of learning a second language are emphasised, renders the online survey “extremely limited”.

The organisation is calling on Minister for Education Joe McHugh to cancel the consultation and to replace it with a new process.

“It is a great pity that the Department of Education and Skills has established an unsatisfactory, rushed consultation in relation to the system of exemptions, 15 years after they first announced that they would carry out such a review, at the worst time of the year,” said Mr Comer.

“It seems that the Department of Education and Skills is following a Twitter type of process and limiting answers in section two of the survey to 120 words. This is an insult to anyone who has recommendations to improve the system,” he added.

Under the current exemption system, there are certain limited circumstances in which an exemption may be granted and the authority to grant exemptions has been delegated to school management.

Evidence shows that thousands of students who secure exemptions are sitting exams in foreign languages. The latest figures show that almost 4,000 students were granted an exemption to sit the Leaving Cert Irish exam in 2016 on the grounds of a disability. Of these, almost 60 per cent went on to study a European language.

In answer to a query from The Irish Times the Department of Education said a new “transparent system” for exemptions is needed in September 2019. The aim of the new system, it said, should be that exemptions are only granted “in rare and exceptional circumstances”.

“We want to hear the best advice and guidance from those who know and cherish the language,” a representative added.

While not directly addressing the concerns raised by Conradh na Gaeilge, the department said it was seeking “a wide range of views” on the matter and that the online consultation process “is one method of gathering these”.

The spokesperson said the department would be happy to engage directly with Conradh na Gaeilge in relation to further recommendations they may have.

The closing date for the Department of Education survey is January 11th. For more information: education.ie/en/Parents/Information/Irish-Exemption/