Enrolment in multidenominational schools rose by 3.6% in September 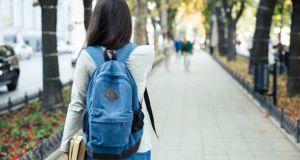 There were 4,138 more new pupils at primary level in 2018 than the previous year

Enrolment in multidenominational primary and post-primary schools in September rose by 3.6 per cent while Catholic school pupil numbers increased by 0.4 per cent, according to a Department of Education draft report.

A breakdown of the statistics shows a 7.7 per cent increase in multi-denominational primary school enrolments while the number of new pupils rose by 0.4 per cent in Catholic establishments.

At post-primary level multi-denominational enrolments increased by 2.8 per cent while a rise of 0.4 per cent was reported for Catholic schools.

The preliminary results show an overall increase of almost 10,000 pupils at both school levels bringing the total number of children in education to 922,458.

However total enrolment in Catholic primary schools dropped by just 0.3 per cent in the 2018/2019 school year. This means that 90.3 per cent of children – 505,053 of the 559,569 children in primary education – attend Catholic establishments.

There are 28 more multidenominational post-primary schools in the State since 2009, bringing the total to 349 this year. The number of Catholic schools has dropped by 15 in the same period to 346.

There are now 99 large post-primary schools, defined as those with 800 or more pupils, in the State, up from 54 in the past decade and this trend is expected to increase with an expected rise in post-primary enrolments.

The research also showed 708 small schools have 60 pupils or fewer enrolled this year. These schools account for 22.8 per cent of all schools but have 4.4 per cent of enrolments.

Minister for Education Joe McHugh said the numbers in the report “highlight the rise in the school-going population, with an increase at both primary and secondary level enrolments.

“They reflect the important changes taking place in the patronage of our schools, with more choice available to parents.”

He said the figures provided essential data to enable the department to plan and implement changes to provide greater diversity and choice in the education system.

As part of the departmental process of creating greater choice on school patronage an online process was established to enable parents to register their choice of patron and their preference for education through Irish or English.

Four post-primary schools are to open in 2019 with Educate Together patronage.