Student group apologises for ‘inappropriate’ behaviour during election of representatives 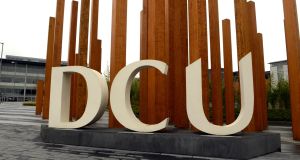 Dublin City University said it had initiated a process under its student code of conduct and discipline with a view to potential disciplinary action in relation to reports of “grossly inappropriate behaviour”. File photograph: Cyril Byrne/The Irish Times

Dublin City University is examining disciplinary action against students on foot of “nude acts” which took place during a meeting of the college’s accounting and finance society.

The university said it had initiated a process under its student code of conduct and discipline with a view to potential disciplinary action in relation to reports of “grossly inappropriate behaviour”.

The relevant section of the student code of conduct states: “Students must conduct themselves in such a way as not to bring themselves or the university into disrepute.”

A DCU spokesman told The Irish Times that the university expects all students and staff to abide by an ethos of “dignity, courtesy and respect at all times and to operate to the highest possible standards”.

Under the code, the range of potential sanctions range from a written apology or reprimand to suspension or expulsions from the university.

Controversy arose earlier this month during the election of first-year class representatives to the accounting and finance society.

DCU’s College View reported that candidates were required to undergo a series of tasks including dividing students into pairs and asking them to pop a balloon placed in between their hips. The last couple to pop the balloon was eliminated.

Other rounds involved students kissing each other, in order to move to the next round, or sending messages to their partners stating they were going to break up or that they cheated on them.

The final round involved students singing different songs while stripping off their clothes or, in one case, another student’s clothes.

In a statement issued on its Facebook page recently, the accounting and finance society (A&F) said it had been “suspended from social activity for semester one of this year”.

“A&F will ensure that this does not happen again and would like to take this opportunity to apologise to any member who was offended by last week’s EGM,” it said.

“We will continue to run accounting grinds, networking sessions and other non-social activities during semester one.”

Dozens of clubs and societies, meanwhile, have called on the accounting and finance committee to resign.

They have demanded that some of the society’s budget go towards running consent classes on campus, according to the College View.

A spokeswoman for DCU said “inappropriate behaviour of this nature is not tolerated by the university”.

“The issue was dealt with promptly and decisively by the university’s society life committee which is directly responsible for the governance of student societies at DCU,” she said.

She added that it was decided that the students involved in organising the event in question “should undergo a training workshop focusing on the topic of respect and dignity”.