Is your child ready for ‘big school’ ? 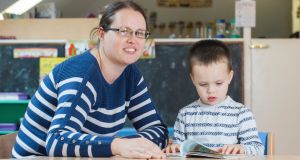 When Evelyn Holland’s son Ben turned four last April, she had every intention of sending him to school the following September.

“He is very tall, I thought, ‘yeah, he is ready to go’,” says Holland. But as the day drew close, she changed her mind. “I got nervous. I talked to friends, colleagues and staff at the creche.”

She decided Ben would be better served if she postponed formal schooling until he turned five.

Holland, who works as a special needs assistant in a primary school, is familiar with the demands of the junior infant curriculum and how starting school without certain skills can affect some children’s success at school. “You see some struggle to put on their coat or their shoes or even go to the bathroom. These are all skills that children need to have coming to school,” she says.

Holland isn’t alone in choosing to postpone sending her son to school. There has been a dramatic change in the age profile of junior infants, with the proportion of five-year-olds climbing from 52 per cent to 75 per cent between 2000 and 2017-18, the figures show. By contrast, the proportion of four-year-olds fell from 47 per cent to 23 per cent over the same period, based on data collected on January 1st each year.

Fiona Angland has been teaching infant classes at a boys’ primary school in Cork for 15 years and believes communication skills are crucial to a child’s success at school. She has seen the trend in later starting ages and says it gives many an advantage. “Age definitely influences a child’s ability to self-manage, organise books, lunch, coats and toileting. They are more resilient in social play and playground interactions and can clearly communicate their needs and concerns,” Angland says.

Many factors influence parents’ choices in relation to school starting ages: the timing of birth, family background and learning disabilities are just some, according to the Growing up in Ireland report.

Studies also shows children from professional or managerial families are more likely to start school at a significantly older age than those from less affluent families. The extension of the free early childhood year from one to two years has also played a part in delaying children’s entry into “big school”.

While enrolment in early childhood education is not compulsory, many teachers view it as important for success in primary school.

Ireland differs from most European countries, where children are not admitted to school until they reach six years’ of age or older.

In Nordic countries such as Finland and Sweden, which rank highly for both academic achievement and child well-being, primary school starts at the age of seven. Teachers in some of these countries express surprise when they visit Irish schools.

When Bjørn Osdal, principal of Vartdal Schule in Norway – a first to 10th grade school – visited an Irish school recently, he did a double-take. In Norway, six is the compulsory starting age. (In fact, it used to be seven years’ of age until recently). “My eyes had to get used to what I was seeing. Four-year-olds with their school uniforms sitting at their desks.

“They were safe, they were smiling, they were active, but they were using books the way six- or seven-year-olds would be in in Norway. Those small chairs and desks would not be possible in Norway.

“The teacher was really good at what she was doing but it sparks a values debate.”

Osdal questioned where the unstructured play was and whether children as young as four should be exposed to formal education at all.

However, many primary schools and policy-makers point out there have been major strides over recent years to include a more play-based approach to education at primary level.

The Aistear curriculum, introduced in 2009, is a framework for learning for children aged up to six years of age – it aims to allow children to learn through unstructured play.

The framework, which is well-regarded internationally, is centred around key themes: well-being, identity and belonging, communicating, and exploring and thinking. While it was initially used mostly in pre-schools, it is increasingly used in primary schools.

In fact, major reform of the primary curriculum – the most comprehensive in two decades – is set to emphasise a much greater focus on play-based learning in the early years of primary school.

Máire Corbett, an early childhood specialist with Early Childhood Ireland , the representative group for the pre-school sector, says unstructured play is crucial. “ It [Aistear] helps them develop their curiosity, resilience and independence,” she says.

She advocates delaying children’s exposure to formal education until the later age of five or six to give them as much time as possible to take part in unstructured play. “It helps them develop their curiosity, resilience and independence,” says Corbett. “Sometimes people forget that, in Ireland, our compulsory enrolment age is actually six.”

Pupil-teacher ratio is something which makes early childhood centres better-placed to implement programmes such as Aistear, according to Corbett.

However, some who work in the childcare industry believe the ratio of one early-years educator for 11 children is still too high and would welcome a return to one educator for six children.

Going into the formal education system later means, of course, that students come out of it older too.

Apart from the round of 18th birthday parties celebrating the legal drinking age now starting in fifth year, are there any other disadvantages?

For schools, it could well change the dynamics of student-teacher relationships, as well as data-protection issues. Adult students, for example, would be entitled to receive their schools reports instead of their parents.

For all the advice on when children should start primary education, many teachers say there is no one-size-fits-all answer.

While there are essentials, such as a child being able to manage their personal care by the time they start school, issues such as social and emotional readiness can be harder to pin down.

When advising parents about when best to start school, Fiona Angland believes parents should always “trust their instinct and be true to the child and their needs and capabilities”.

“I believe that the social and emotional development of the child is the biggest indicator of readiness,” she adds.

How to help prepare your child for ‘big school’

All experts agree that moving to “big school” is a process and not down to a single day. So how can parents help?

A report published by the National Council for Curriculum and Assessment identifies ways schools and parents can better facilitate the transition from pre-school to primary school and the importance of such preparation for children.

The report refers to Kidsmatter, a programme run in Australia, which helps support parents in preparing their children for primary school. It encourages parents to develop certain skills in their children:

Social and emotional skills: Teaching friendship skills, encouraging turn-taking and getting to know other families in the school community.

Independence skills: Encourage self-help skills like dressing, asking for help and going to the toilet. Promote a sense of responsibility by giving them small tasks. This will help them feel useful and build their self-confidence. Teach children to look after their belongings and understand social rules.

Learning skills: Encourage listening skills by reading to them, promote a hands-on approach to learning through play. Help them to follow instructions – start with one and build up to two-step instructions.