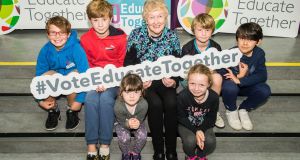 When a pioneering group of parents went about trying to set up the State’s first multi-denominational school in the mid-1970s, they quickly realised the scale of the challenge.

A pamphlet, circulated in the Dalkey area in south Dublin, warned that “there is no need for such a school as this can only be divisive. It can only be hostile to religion in an age where it was never more needed . . . Dalkey could be a precedent for major trouble in other areas.”

Senior officials at the Department of Education – which presided over a system featuring a monopoly of denominational, religious-run schools – were hostile to the idea.

Even planning authority officials – one of whom described the group as the “family planning parents” – made life difficult on numerous occasions in securing planning permission for a school building.

On Thursday, many of those founding parents gathered to celebrate the 40th anniversary of the opening of what would become the first Educate Together primary school in Ireland.

The Dalkey School Project, which opened its doors in the autumn of 1978, followed a campaign by parents who wanted a school where children of all social, cultural and religious backgrounds would be equally respected.

Today, the equality-based school movement in Ireland has grown into a network of almost 100 schools nationwide, with 23,000 pupils.

At a celebration at the Dalkey School Project, Educate Together chief executive Paul Rowe paid tribute to the movement’s founders, who made a unique contribution to Irish education on a purely voluntary basis.

“Their story is a story of what really should be meant by active citizenship; and it’s a story of struggle against enormous odds and successful changes, challenging government policies and transforming social attitudes,” he said.

Áine Hyland, one of the founding parents, recalls that the national school system at the time had been undisturbed for more than 100 years. The strategy of the parents had been to get one school into the system first, with a view to widening access to multi-denominational education over the coming years.

One of her first experiences of the resistance from church bodies was when the parish priest called to her house.

“He wanted to know where we had got married, because if we were married in a Catholic Church there would have been an expectation that our children would be raised as Catholics. I told him it was none of his business,” she says.

“We were seen as radical and anti-clerical. We weren’t. We were just looking for one alternative school to the 4,000 church schools.”

A key advantage for the group was that it knew education policy inside out: Hyland had worked at the Department of Education until she was married; her husband, Bill, worked in a statistical role at the department. Michael Johnston, an RTÉ employee, also had an eye for publicity and was a key spokesman for the group.

Though political support wavered, the school eventually got the go-ahead when Fianna Fáil came to power in 1977. The movement continued to face obstacles establishing new schools, though these were ironed out over the following years.

Demand, she says, is out the door: it has about 800 expressions of interest from parents for the next school year, but only about 30 places.

Despite the progress, she says, there are still those who seek to stereotype the school.

“One of our teachers was out socially and mentioned where they worked. The response was, ‘Oh, that’s the place where they’re hippies, call teachers by their first names, and there’s no Gaeilge up there,’” says Hurley.

“Those stories abound because we have a relaxed approach – but behind that is a huge amount of work, collaboration and structure.”

Rowe says demand for Educate Together continues to grow; it wants every child to be able to access an “inclusive” school.

“Back in the late 1970s, nobody could have predicted how the founders would have influenced educational policy in such a positive way,” he says.

“It’s a tribute to them and to the courage and dedication of the nascent Educate Together school communities in the intervening years that we are now in a position to apply for 13 new schools to open in 2019.”