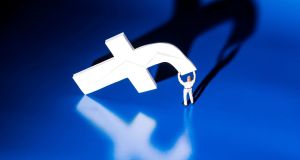 Facebook insisted it was not involved in writing the content of the new safety programme. Photograph: Joel Saget/AFP/Getty Images

Facebook has defended its role in a new campaign to provide anti-bullying and online safety training in every secondary school in Ireland.

The social media firm has been at the centre of allegations that it is not doing enough to moderate harmful and illegal content.

A Channel 4 Dispatches programme earlier this year revealed that some content flagged as inappropriate was not being taken down and was actually being used for training purposes.

At a press conference on Wednesday, Facebook insisted it was not involved in writing the content of the new safety programme.

She said the company was providing €330,000 in funding for the programme, which has been designed over the course of several years by the university.

Ms Sweeney said that while Facebook was not a perfect system, it was working hard to improve processes for moderating and taking down harmful content.

Prof James O’Higgins Norman of DCU said there was a role for industry and academics to work together to resolves online safety issues.

“We found in our relationship with Facebook ... that we have access to all areas and that they are able to answer questions with integrity.”

He said that while they had a “number of questions” around allegations in the Channel 4 programme, his team was “satisfied that they are doing their best to address them”.

Facebook and other social media firms also faced criticism this week from the mother of a young Clondalkin woman who took her life following sustained online bullying.

Jackie Fox said her daughter Nicole Fox (21) died in January and had gone through three years of harassment on her social media accounts beforehand.

She has appealed for support in criminalising anonymous bullying and incitement to self-harm.

Ms Sweeney said Facebook made it very clear in its community standards that the kind of abuse against Ms Fox’s daughter was “absolutely against our policies and will be removed when brought to our attention”.

She said it was probably for other stakeholders to state whether such behaviour should be criminalised.

Under a new three-year partnership between Facebook and DCU, an anti-bullying and online safety training programme will be offered to every post-primary school in Ireland.

Experts will offer this training and research programme to teachers and parents of 12-17-year-old students across the country.

Through face-to-face workshops and online modules, it is intended that participants will be equipped with the tools to identify and understand bullying and develop the skills to support students when it comes to online safety.

Prof O’Higgins Norman said school principals have cited a lack of time and resources available to train teachers and the need for additional support as the main challenges in tackling bullying and online safety in schools.

Meanwhile, there has been controversy over the involvement of tech firms in a new National Advisory Council for Online Safety.

The Irish Daily Mail reported on Wednesday that Facebook, along with Google, Vodafone and the Internet Services Providers Association and Technology Ireland will have seats on a new 20-member council.

Facebook defended its presence on the council, which it said had a broad-based membership. It said it had teams of online safety staff and regularly worked with local law enforcement.