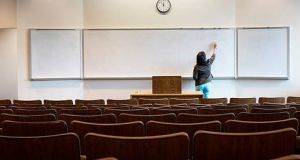 Irish universities argue they should be given much greater freedom to hire staff now that many of them are generating the bulk of their incomes privately. Photograph: Getty Images

When it comes to recruiting the very best talent for Irish universities, are we paying enough to secure the top academics?

Ask any university president and they will tell you we’re not at the races. The problem for Irish universities is these salaries are capped under strict rules known as the employment control framework.

In theory no public sector worker can earn more than the Taoiseach, who is on a salary of about €190,000. An Irish Times analysis of pay across higher education shows there are dozens of – legitimate – exceptions to this.

Across third-level institutions, there are at least 70 individuals on salaries in excess of €200,000 a year.

Overall, the biggest category of high-earners are academic consultants. Their salaries are paid for by the HSE, and their affiliated higher education institutions.

Hospital consultants are among the only public service employees who are on a pay-scale that rises in excess of the Taoiseach’s and is capped at about €230,000.

Third-level colleges may also pay staff in excess of public sector pay caps in cases where they have received special authorisation by the government. These are known as “departures framework” appointments, and typically involve researchers who have the potential to attract significant amounts of research funding for colleges.

While international comparisons indicate that Irish academics are relatively well paid, universities argue that that we are simply not able to compete for top talent due to public sector pay caps

In all there are 17 such appointments which range from about €140,000 to more than €300,000. Many have been recruited under Science Foundation Ireland’s research professorship programme.

Overall, the highest earning academic is UCD’s Prof Boris Kholodenko, deputy director of the the university’s systems biology centre, who earns €336,927 per year. The Russian-born academic, one of the world’s leading experts in systems biology, earns €264,464 plus €72,463 in lieu of pension as he is not in any UCD pension scheme. His team is involved in cutting-edge work which is deepening understanding of cancer dynamics.

Another top earner is Prof William Wijns, an expert in cardiology, who is a professor of medical devices, who is on €250,000. He is spearheading a €5 million research project aimed at developing wearable sensors to alert patients at high risk of heart attacks to triggers such as stress.

The next highest earners are academic medical consultants, who in most cases have incomes in excess of €200,000. Our panel only identifies some of them because institutions such as UCD and TCD did not release their names.

While international comparisons indicate that Irish academics are relatively well paid, universities argue that that we are simply not able to compete for top talent due to public sector pay caps.

They argue they should be given much greater freedom to hire staff, especially now that many of our universities – Trinity, UCD and UCC – are generating the bulk of their incomes privately.

“It is becoming increasingly difficult to attract top talent, especially in the research area, due to intense international competition,” said Jim Miley, director general of the Irish Universities Association.

“Ireland needs to be able to compete for the best talent in the market if we want to be truly world class. The best way to do this is to provide much greater flexibility to individual universities to hire the people they need to be the very best at what they do.”

The Irish Federation of University Teachers, however, says paying large sums to “trophy staff” is no response to a decade of policies that have subjected low-ranking researchers to cost-cutting measures.

“The crisis of attracting and maintaining qualified lecturers and researchers will only be reversed by a recommitment of the exchequer to provide adequate resources,” said the federation’s general secretary Joan Donegan.