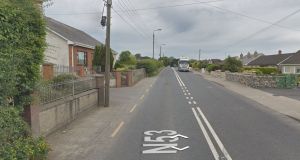 Gardaí investigating a samurai sword attack on a teenager were called to the Castletown Road area (general view above) of Dundalk at about 2.10pm on Saturday. File photograph: Google Street View

Gardaí in Dundalk have arrested a man after a teenager, believed to be aged 17, was assaulted with a samurai sword on Saturday afternoon.

Gardaí were called to the scene in the Castletown Road area of the town at about 2.10pm.

Gardaí confirmed that “a male youth sustained serious injuries in what is believed to have been an altercation between himself and a number of youths”.

“Three males entered a house armed with what’s believed to be a samurai sword and allegedly assaulted another male. The injured man was taken by ambulance to Our Lady of Lourdes Drogheda Hospital where his condition is described as stable.”

It is understood he suffered injuries to his arm.

One man was arrested and taken to Dundalk Garda station.

The weapon was not recovered and Garda investigations are continuing.