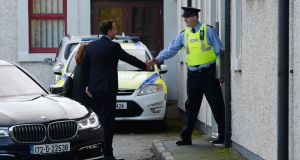 Speaking alongside Minister for Justice Charlie Flanagan during a visit to the Co Louth town on Friday morning, Mr Varadkar expressed his “revulsion and condemnation” of the killing of the 17-year-old whose body was dismembered and left in different parts of Dublin on Monday.

He said he had come to the town, which has been at the centre of the two-year-old criminal feud, “to assure the people of Drogheda that the Government is 100 per cent behind them and we are going to get these people behind bars and that we are going to make this town safe again.”

The killing of the teenager and Monday’s gun attack on an innocent taxi driver near the Garda station in the town has marked a serious escalation in the feud.

This week’s violence has, in the first week of the General Election campaign, turned a spotlight on Fine Gael’s record on fighting crime, making it a major issue ahead of voting on February 8th.

The Taoiseach and Mr Flanagan travelled to Drogheda to meet senior gardaí in the town investigating the feud between two criminal gangs and to receive an update on the investigation. Their meeting lasted an hour and a half.

Asked what he would say to people of Drogheda fearful of walking the town’s streets because of the increased feud violence, Mr Flanagan said they were visiting Drogheda to offer reassurance to people. There had been an increase in police resources in the town, he said.

“This has been a brutal and heinous crime. There has been an ongoing and intensification Garda investigation. I’m satisfied from talking to the Garda Commissioner as recently as yesterday that progress is being made,” he said.

“This brutal murder must be seen as a line in the sand as far as gangland criminals are concerned and our message is there is no hiding place here in Drogheda or across the country.”

The Taoiseach said what would reassure people was the increased Garda presence: there had been a 50 per cent increase in Garda numbers, 50 more gardaí, and he promised more.

“I would hope that me being here with the Minister of Justice is a gesture of solidarity and a gesture of support, and that people will see it as such,” he said.

But what would really reassure people were arrests and convictions, he said, and he urged people to come forward with information as evidence was needed to achieve this.

“The Garda­ need information on people to bring that information forward or agree to become witnesses will be protected,” he said.

Mr Varadkar defended his Government’s record on law and order, saying that homicides, murders and manslaughters had fallen by 40 per cent during his time as Taoiseach, which he attributed to the increased resources the Fine Gael-led government had invested in policing.

“Fine Gael is the party of law and order, and people know that. We are the party that has restored Garda recruitment, that has given the gardaí more resources that ever before, a budget of €1.9 billion for this year,” he replied.

He criticised the previous Fianna Fáil-led government for reducing Garda numbers before Fine Gael took office in 2011. His party had pledged to recruit an additional 700 gardaí recruits every year, bringing the police force to 21,000 people by next year.

“The previous government, not run by my party, stopped Garda recruitment, we have resumed it,” he said.

Armed support units in every region and a national drugs and serious crime bureau that did not exist before were “proving results,” he said.

“But that doesn’t mean that you can eliminate crime and murders entirely. But we have to make sure that where they occur, that there’s a swift response, that people are brought to justice and that’s what we are going to do,” he said.

There was anger among people on the streets at the Government’s response to the feud with many feeling that not enough had been done to police the town. Some said they would change their vote in the February 8th election because of the Government’s policing response.

“The resources aren’t there. It is no good bringing kids into the town. That’s all it is: kids out of Templemore,” said Mark Kerr, referring to the new Garda recruits assigned to Drogheda.

“People, walking down the town, are afraid of their lives and looking behind them all the time. What can you do? People have to get on their lives but you can’t go out the door but be afraid.”

“There are still insufficient resources for the gardaí in this town. These gangs seem to feel like they can shoot this town up like it’s the Wild West and get away with it. It is a disgrace,” said David Saurin, putting change into a parking meter on West Street in the centre of Drogheda.

The Government had not made a difference in trying to end the feud, he said, and he didn’t “see what difference they will make if they get back into power.”

“They have had enough time,” he said.

Labour leader Brendan Howlin, speaking at a campaign event for his party in Drogheda, said that a more joined-up, multi-agency approach was needed to end the town’s gangland feud and with the “intensity” of policing that led to the demise of criminal gangs in Limerick.

“The notion that you would take 50 gardaí fresh out of training college and put them on the streets here as if that’s a solution,” Mr Howlin told reporters in response to Mr Varadkar’s comments on the Government adding extra gardaí in Drogheda.

“That is not the way that you need to approach this. You certainly need Garda numbers but you also need sophisticated interventions, people embedded in intelligence, getting community involvement, understanding what is going on.”

Mr Howlin said the murder of Keane Mulready-Woods had “shocked all of us to our core” and that “all of us are determined that we will see down this domestic terrorism.”

Meanwhile, at an election campaign event in Dublin, People Before Profit TD Richard Boyd Barrett has said “ the war and drugs has failed. The law and order approach has failed.”

Speaking after the latest shooting of two people in Ballymun he described the recent spate of attacks as “horrific and shocking”.

The Dún Laoghaire TD said there was no “quick fix” to the problem because it was a global issue. “We are failing our young people. We’re not putting our resources in schools and communities at the very earliest age to provide alternatives and support that will help divert young people from criminality.”

Solidarity TD Ruth Coppinger said “you can’t deal with the demand for drugs with a Garda response” and it had to be treated as a health issue.

“I don’t think you can blame somebody for causing gangland crime through (recreational) drugs on a Saturday night. I think you have to deal with the causes of drug abuse which are very much social and class-based.”

Ms Coppinger, whose Dublin West constituency has experienced shooting incidents and criminal activity, said it was “just ridiculous” to say social drugs use was enabling crime because it was people would not “just suddenly stop using drugs”.

Rather than leaving drugs in the hands of criminals, “there has to be significant discussion in society in providing people with an addiction to drugs if that is going to stop people” engaging in drugs crime.