Lord Mayor says to those involved in drugs: ‘There is no place for you to live among us’ 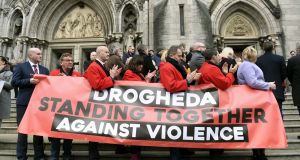 Politicians on the steps of St Paul’s Church on West Street in Drogheda during a protest march over drug-related violence in the town. Photograph: PA

Some 4,000 people walked from Drogheda’s Peace Bridge to the centre of the town on Saturday, accompanied by the Taoiseach Leo Varadkar and several party leaders, to hear politicians excoriated for their alleged lack of action over illegal drugs.

“We are about the business of taking back control of our town” from the criminals, Lord Mayor, Councillor Paul Bell of the Labour Party told a crowd gathered in front of St Peter’s Church on West Street.

He said residents would not fail to rid “our cities of those who, as of today, are convinced they are invincible.”

The crowd of mostly local people, some parents with children, and some anti-drug and community activists, were galvanised into action by the recent murder of 17-year-old Keane Mulready-Woods, who is believed to have been killed in the town but whose dismembered remains were then strewn between a holdall bag flung from a car in Coolock in Dublin.

His severed head was later found in a burnt out vehicle - all an apparent warning from one side to the other in Drogheda’s drugs feud. The search for the remaining parts of his body continues and his funeral date has not been set.

“Today,” said the Mayor, “Drogheda speaks for all of us on this island: the issues we have are shared by citizens all over the country. . . “There is no place for you to live among us,” he said to those involved in drugs.

Standing with him, on the steps of St Peter’s, was Mr Varadkar and Fianna Fail leader, Micheál Martin, the Sinn Féin leader, Mary Lou McDonald, the leader of the Labour Party Brendan Howlin, the leader of Aontú, Peadar Tóibín, and several outgoing and aspirant TDs, among them Helen McEntee, Fergus O’Dowd, Gerry Adams, Dermot Ahern, Jim O’Callaghan and Thomas Byrne.

The procession across the bridge and into the town was led by four local women – Anne Nolan, Catherine Baker, Emma Cutlip and Rosie Condra, accompanied by her 13-year-old son Jacob. They carried posters proclaiming “Drogheda says Stop!” with an image of a handgun and a red line slashed through it.

Not long after the murder of Keane Muldready-Woods, the bridge was the scene of the shooting of taxi driver John Myles who was wounded during a gun attack on passengers in his taxi just yards from the town’s Garda station and courthouse.

“We need to come together as a community,” said Ms Condra, mother to two other boys, Joshua and Joe. She said young people needed adults to advocate for them and show them there was a better life than the temptations offered by those in the illegal drugs trade.

The march also featured a row of town councillors, bedecked in their red robes and carrying a wide banner that said: ‘Drogheda - standing together against violence’.

Outside the church, Jackie McKenna of the Family Addiction Support Network (FASN), begged the politicians present “for help to deal with the horrific effect drugs are having on our town”.

She said firm government action over 20 years had seen a sharp decline in road deaths. But over the same period, she said, drug deaths had gone from 630 a year to 786 most recently.

She said her organisation of some 30 volunteers spread across four counties had seen no increase in their grant since 2008.

By her estimate, FASN’s volunteers had saved the State €174,000 in the man hours they provided. And what did her organisation get in return by way of financial held, she asked? State aid of “€7,508 a year”.

Most volunteers had given 10 to 20 years’ work trying to combat drug abuse and help young people. That was 10 to 20 years away from the workplace and accrued pension entitlements, she said.

“Although we are only in the first month of year,” she said, “there are days when we are swamped” by people and families seeking help over drug abuse.

Louise O’Mahony, manager of the Red Door Project, said her organisation had seen “no meaningful increase in funding in the last 10 years”.

“Today, we march to say enough is enough,” she told the crowd. “Enough of Drogheda being treated as a second-class town.”

Taoiseach, party leaders and the other politicians listened attentively and while they were criticised, they were given, for the most part, a cordial reception.

Speaking to reporters, Mr Varadkar said he was there “really to stand shoulder-to-shoulder with the town”. No one wanted to score political points on this issue, he added.

Mayor Bell thanked the politicians for coming and for making what he said was “a massive gesture of solidarity” with the town.

He urged the government to consider tackling gangland and its illegal drugs trade with the sort of determination, policing and legal tools used to combat illegal paramilitaries in the 1970s.

“We want the government to consider and change the laws that deal with drug activity,” he said, adding that there was no such thing as “recreational” drug use.

Father Eugene Sweeney said he wanted to echo the view of the town’s gardaí. “All who take drugs, in this town, at this time, are complicit” in the death and violence that came with the drugs trade, he said.

The march was, he said, a display of “solidarity [and of] shared valued and determination”.