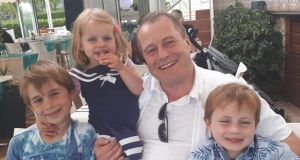 Conor (9), Carla (3) and Darragh McGinley (7) with their father Andrew McGinley. The children were found dead in a house in Co Dublin on Friday night. Handout photograph: Andrew McGinley/An Garda

The three young children whose bodies were discovered in a Co Dublin house on Friday evening have been named.

Gardaí are expected to begin a triple murder investigation as early as Saturday after the discovery of the bodies at Parson’s Court, Newcastle, just after 7pm on Friday.

The children were named by gardaí on Saturday as Conor (9), Darragh (7) and Carla McGinley (3).

A woman, believed to be the children’s mother, is continuing to be treated at Tallaght hospital after she was found in a distressed and disorientated state outside the property.

It is understood the children’s father Andrew McGinley was not at the house at the time.

The deaths of the children are being treated by gardaí as “sudden” and “unexplained” and the inquiry into their deaths is criminal in nature.

One strong line of investigation was that the children met with foul play, though early indications are they had no obvious injuries to their bodies. Gardaí were hoping to speak to the woman, who is in her 40s, as early as Saturday.

When gardaí and paramedics arrived at the scene just after 7pm on Friday the children were pronounced dead inside the house. It was unclear how long they had been dead.

The emergency services were alerted by a taxi driver who found the woman on the street and took her home.

When the driver arrived at the house he saw a note with instructions not to go upstairs but to call to call 999 instead.

The driver then called the emergency services and when gardai and Dublin Fire Brigade entered the property they discovered the three children dead upstairs.

As the children had no visible signs of injury it was expected that toxicology tests would be needed as part of the postmortem process to confirm how the children died.

The scene was sealed off by gardaí and the bodies of the children were removed from the property after 10am on Saturday and brought to the city morgue, where a postmortem examination will take place.

The scene was examined by members of the Garda Technical Bureau, while Assistant State Pathologist Margot Bolster also attended.

Sources said all the resources of a homicide investigation had been committed to the case.

Gardaí said a family liaison officer has been appointed and is in contact with Mr McGinley and the extended family.

Several bunches of flowers were placed at the scene on Saturday. A special Mass was held at St Finian’s Church and a book of condolences was opened.

“What we prayed for at Mass today was, we prayed out of the fact that we have no words to speak but our presence is words speaking,” co-parish priest Fr Kevin Doherty told The Irish Times.

“We pray especially for parents and children, and we just spoke about the darkness has come but the light is present among us and that each one of us will be a light to another.”

A father-of-four whose children played with the McGinley children in a local playground said “they were just normal little kids...they were out there playing and they were happy”.

The man, who lives close to Parson’s Court with his family, said the community has been left “shocked”.

“It’s something you don’t want to hear. You always think it happens in other places, you don’t think it’s going to happen on your doorstep,” he said.

Tusla said on Saturday it would put in place necessary supports as part of a critical incident protocol developed by the South Dublin Children and Young People’s Service Committee.

The protocol is activated following serious incidents likely to impact a community, it said.

If you or someone you know needs someone to talk to, contact the Samaritans on 116 123.