Asylum claims by Georgians and Albanians brought to abrupt halt 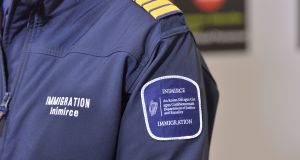 As part of the clampdown, immigration checks at passport control in Dublin Airport were moved back to the steps of arriving aircraft and those with fake documents were refused entry. Photograph: Alan Betson/The Irish Times

The number of Albanian and Georgian nationals claiming asylum in the Republic plummeted close to a standstill late last year, new figures show.

An immigration clampdown at Dublin Airport saw applications from both nationalities slow to a trickle after sustained increases as far back as 2014.

Officials in the Department of Justice were hopeful the slashing of applications by migrants from the two European countries, which are categorised as safe, would help take the pressure off the direct provision system.

In recent weeks Minister for Justice Charlie Flanagan told The Irish Times immigration checks had been increased at the airport because some migrants were destroying fake documents once they disembarked from airlines but before they reached passport control, where some would then apply for international protection.

They were coming in such numbers, he said, they were driving the overall increase in the number of people of all nationalities applying for international protection.

Mr Varadkar was criticised at the time for targeting his remarks at just two nationalities. However, the trend that he highlighted appears to have been brought to an abrupt stop.

Last September, some 191 Albanians applied for asylum, the highest ever monthly total after applications from them had been rising for six years.

But when immigration checks were severely tightened at Dublin Airport, the number of Albanians applying for international protection in October more than halved to 90. And there were only seven applications in November; a 96 per cent drop in two months.

Similarly, the number of applications from Georgians reached a record high of 117 last September. That reduced by half, to 58 applications, in October and fell to just 17 applications in November.

The latest data has been made available by the International Protection Office, which is part of the Department of Justice.

In 2018, Albanians topped the list of people seeking protection, with 459 applications, and Georgians were next, with 450 applications.

In the first 11 months of last year, there were again more applications for international protection from Albanians than any other nationality, with Georgians next on the list; some 972 and 631 applications respectively.

The number of claims for asylum in the State, from all nationalities, peaked at 11,634 cases in 2002.

Garda sources told The Irish Times that a redoubling of efforts to address the increasing number of Albanians and Georgians entering the Republic to claim international protection was already well underway before the Taoiseach spoke out.

Immigration checks at passport control in Dublin Airport were moved back to the steps of arriving aircraft and those with fake documents were refused entry.

Airlines have been told to take such individuals back on return flights before any opportunity to claim international protection arose. Gardaí said this ensured more airlines were closely checking the travel documents of passengers boarding Dublin-bound flights as they did not want the expense of bringing passengers back on a return flight.