Community in shock after three children die: ‘It is just horrific’

Deaths in Newcastle: ‘They were just normal kids . . . out there playing and they were happy’ 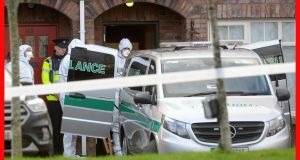 An ambulance outside a house Newcastle, Co Dublin where three children were found dead on Friday. Photograph: PA

From early this morning in Newcastle, Co Dublin young women began placing bunches of flowers at the entrance of Parson’s Court, the estate where the bodies of three young children were found at their home last night.

The bodies of Conor (9), Darragh (7) and Carla McGinley (3) were removed from the house on Saturday morning.

One woman who was pushing a buggy and holding a large bunch of white and pink flowers, told The Irish Times: “I didn’t know the family, but when I heard what happened, I just thought it was the right thing to do.

“I’ve been living in the area for two years and it is just horrific. Nobody can believe what has happened.”

The bodies of the children were discovered at 7pm on Friday. A woman in her forties and believed to be the children’s mother is being treated at Tallaght hospital.

A special Mass was organised by co-parish priest Fr Kevin Doherty at St Finian’s Church on Saturday morning for the community and a book of condolences was  opened.

“What we prayed for at Mass today was, we prayed out of the fact that we have no words to speak but our presence is words speaking,” Fr Doherty told The Irish Times.

“We pray especially for parents and children. We spoke about the darkness [that] has come but the light is present among us and that each one of us will be a light to another.”

He added local Church of Ireland members had also attended the Mass which was “nice to see; because everybody is trying to make this journey together for the family”.

A father-of-four whose children played with the McGinley children in a local playground said: “they were just normal little kids...they were out there playing and they were happy”.

The man, who lives close to Parson’s Court with his family, said the community is “shocked”.

“It’s something you don’t want to hear. You always think it happens in other places. You don’t think it’s going to happen on your doorstep,” he said.

Couple charged with murder of man in his Cork city home