Boy (15) stabbed during row between gangs of youths in Dublin 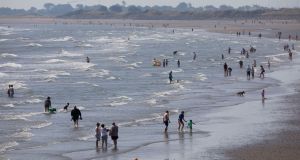 Portmarnock Beach in Co Dublin where a 15-year-old boy was stabbed on Friday night. Photograph: The Irish Times

A 15-year-old boy is in hospital after being stabbed during a row between two gangs of youths at a beach in north county Dublin.

The attack happened during what gardai are describing as an altercation at the entrance to Portmarnock Beach at around 9.30pm on Friday evening.

The spot is known for youngsters gathering on weekend evenings, and a number had traveled to the area by public transport, gardaí believe.

A member of the public who was alerted to the stabbing rushed the boy to Malahide Garda station, where members of the Armed Support Unit initially treated him.

The teenager was then taken by ambulance to Temple Street Children’s Hospital, where his condition is described as “stable”.

No arrests have been made to date and Garda forensic officers are examining the scene.

Superintendent Gerry Donnelly said gardaí are looking for witnesses who were in and around the entrance to Portmarnock Beach, Velvet Strand, Coast Road and Wendell Avenue between 9pm and 10pm.

Anyone with camera footage that could help the investigation is also being asked to get in touch.

“Gardaí are also appealing to any persons who may have been using public transport in that vicinity and came across large groups of youths availing of transport services,” said Supt Donnelly.